Alyssa Harad in Conversation with Persolaise, London – 20th May 2014

Author Alyssa Harad is so vivacious, funny and warm it’s hard to do her justice in writing. She says nearly everything with a smile in her voice. Even when she gives a reading from her memoir “Coming To My Senses”, it’s more like listening to a performance poet than a writer. In short, she is a complete joy.

Alyssa has a PhD in Literature and been a regular contributor to Perfume Smellin’ Things and the mother of all perfume blogs, Now Smell This. In part, her book is about gradually “coming out” as a perfumista, reconciling her love of perfume with her scholarly, feminist identity.

Being very active on Twitter, she struck up an online friendship with Persolaise who organised this event on learning she would be travelling from Texas to London. Held at the historic pub “Dirty Dicks” in the City, a gaggle of perfume lovers gathered in an L-shaped room on a muggy Tuesday evening. Persolaise recorded the conversation and may post a transcript on his blog but below is my take on the evening.

Persolaise started off by asking Alyssa what inspired her to write the book. She replied that she had never dreamt of writing her memoir. At first she felt motivated to do something because all these talented female bloggers were publishing their writing about perfume for free. Her initial idea for a book was to put together an anthology of their posts.

However, the participants began to drop out of the project, so she had to come up with new ideas for her editor. One of them had a more personal slant and her editor then came up with the idea of her writing a memoir. Clearly reticent about the prospect, it took her a year to come back with the proposal which turned into the book.

In response to a question from Persolaise about her becoming interested in perfume as a feminist, Alyssa explained how having been in grad school and an activist she was all about “saving the world”. This involved saying the word “No” a lot whereas perfume was all about pleasure and saying “Yes”. Her friends didn’t blow-dry their hair or wear high heels. They thought perfume was overwhelming and unnatural “even though they doused themselves in essential oils which could break down and become toxic.”

Alyssa exclaimed “Perfume people are the best!” citing generosity, quirkiness and willingness to seduce others with perfume as the basis for this factually correct statement. She wasn’t used to people giving without expecting anything in return. She kept waiting for the catch, which (of course) never came.

We were treated to a highly entertaining reading from her book which details an experience I’m sure many of us have had when telling non-perfume people about our passion:

“So they ask, what are you writing about these days? There is a pause while I decide whether or not to tell the truth. Most evenings, I take a sip of my drink and a deep breath and with the feeling of beginning to run towards the edge of a cliff I say, Well, I’ve gotten really interested in perfume.

Another silence falls while my acquaintance looks at me – hostile, bored or slightly interested, but always very puzzled – and then they say Perfume? You mean like essential oils?

This is an act of translation in Austin, essential oils are available at the farmers’ market, the health food co-op and the women’s bookstore… The cheerful blue-haired girl serving your latte (in Austin all our rebels are cheerful) may reek of patchouli oil, but she doesn’t wear perfume. Perfume is for her mother who lives in Dallas. My acquaintances know I’m not a Dallas kind of girl so they give me an out, a chance to redeem myself. You didn’t really mean to say perfume, did you?

But I did mean to say perfume, so I have to tell them. No. Not oils. Perfume. And then they say, You mean you like perfume? (Because surely there is some other reason I’m writing about it.) And I keep right on going off the cliff and into the air, and I say, Yes. Yes, I like perfume. Then all communication breaks down and they say, I don’t understand. What exactly are we talking about here?”

This caused much mirth among the assembled crowd, as you can imagine.

Persolaise asked her opinion on different cultural attitudes towards perfume. Alyssa told us that her husband is Mexican American and his relatives feel that when they are getting ready, a dab of perfume means they’re done. She felt it was also partly a class thing. The working class people she knew were the ones who wore perfume and had perfume collections.

In the following reading, Alyssa relates the heady experience of encountering a big perfume love for the first time:

“I was very happy in this secretive, studious, closed circle and probably would have remained so forever if trouble hadn’t come along, as it inevitably does, in the form of undeniable gorgeousness. I could smell it as soon as I opened the latest envelope. I rifled through the other little packets, looking for the source, but it took me a while to find it because I kept pausing to take another hit from the inside of the envelope.

When I did, I popped the top of the vial open and applied the contents generously to my wrists and throat. The scent rose up all around me, and I closed my eyes and leaned against my desk as my knees went weak, clichés be damned. I may have moaned a little.

When the initial burst subsided, I recovered enough to lean my head over my wrist and breathe in more slowly. There it was, the raw sweetness of wine and wild honey, with the tang of muscat grapes and falling leaves running through it, giving it life and movement – a scent of October light and blue autumn skies. It had melted into my skin instantly, and now it was radiating out from it, surrounding me in a glowing golden haze.”

Alyssa doesn’t mention many of the perfume names in the book and acknowledged this “drives people mad!” She did this for a number of reasons: Sometimes her feelings had changed since her initial experience or the name would be hard to explain, or she feared the perfume might be reformulated by the time the book came out. However you can find out what many of the perfumes were on her website.

This was her response to Persolaise asking what her favourite perfume of all time was – “That’s a stupid question and you should know better!” After much hilarity around the room she clarified this by saying “It’s the best perfume for you at that time, with those people, in that landscape, right?”

A few questions were then asked by those assembled. The first concerned the name of the boozy amber perfume she recommended to a friend in the book. Alyssa said that she tried to get her friends into perfume as well so they wouldn’t reject her. This particular fragrance was Ambre Russe by Parfum d’Empire.

When asked about men’s attitude to perfume, Alyssa made us laugh by saying “Straight guys – poor babies!” She jokingly said that if they could loosen up there’d be a lot less problems in the world. “Curious, tentative and tender” was the endearing way she described her own husband’s attitude to perfume. A particular favourite of his is Bois Farine by L’Artisan Parfumeur.

Someone asked if there would be an audio version of the book which prompted Alyssa to tell us that the whole first chapter of the book and a few short excerpts are now available on Soundcloud.

If hearing from Alyssa wasn’t enough of a treat, she also spoilt us by bringing along some perfumes for us to sniff, including several of her own vintage gems. There was Botrytis by Ginestet, which is the honey perfume she is floored by in the first reading, vintage Songes by Annick Goutal which had a lot of tuberose and vintage Mitsouko which was beyond potent.

Alyssa said her vintage Scandal was a lot more “leather and florals” than later versions. There was also vintage Rochas Femme parfum, which was her mother’s signature scent and the perfume she sets out to track down at the end of the book.

The vintage perfumes were so full-bodied, striking and seductive I could see how easy it is to get sucked into collecting them, despite the often prohibitive cost and high-risk of heartbreak. All those now banned perfume materials simply smell so good.

Before falling down the vintage rabbit-hole, Alyssa thought that people had a tendency to say all the good stuff disappeared before you arrived and felt they were being rather nostalgic. Out of curiosity however, she got a travel set of Guerlain miniatures so she could try vintage Mitsouko for herself. “Damn if it wasn’t fantastic!”

In case you’re wondering what Alyssa was wearing on the night, it was vintage Fracas. Perfect!

Before we left, we were each given a little bag of samples from various brands to take home which was a lovely bonus. 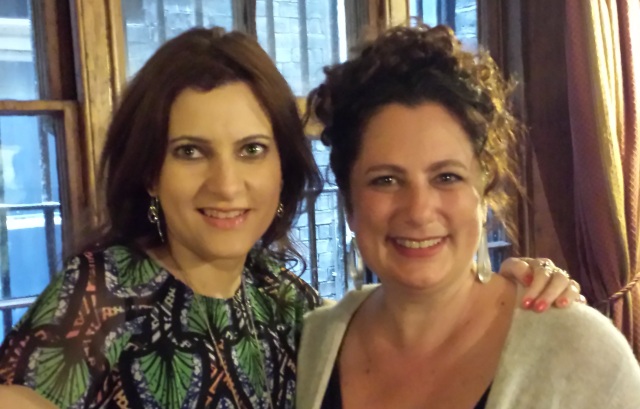 Many thanks to Persolaise for putting the whole event together and to Alyssa for writing her wonderful book and being such a pleasure to spend time with.

Have you read “Coming To My Senses”? What are your favourite books about perfume?

I'm on a journey through the world of fragrance - come with me!
View all posts by Olfactoria →
This entry was posted in By Tara, Interview and tagged Alyssa Harad, Book Review, Coming To My Senses, Fragrance, Interview, London, Perfume, Persolaise. Bookmark the permalink.

19 Responses to Alyssa Harad in Conversation with Persolaise, London – 20th May 2014