Posted on December 1, 2011 by Olfactoria

Four days in New York City! This long awaited and hotly anticipated trip was wonderful and, as I knew it would be, too short to do everything I wanted to. But that is okay, it is always nice to know that it is inevitably necessary to go back. 🙂

On Thursday, Thanksgiving Day, my husband and I flew to New York City only to leave it again as fast as possible. We rented a car and drove upstate to Harriman, a small town that would not be remarkable in any way, were it not for the largest outlet center in the US (the world in all probability, although I have not checked that fact!), Woodbury Common.

The opening hours are made for people suffering from jetlag anyway, so since we were up at 5am, it was nice to make use of the time and go shopping. (Since it was Black Friday, the stores opened as soon as 9pm on Thursday and were open through the night.) We had a strict plan, without that, the Black Friday hysteria would have overwhelmed the bravest shopper.

Of course, I checked out the perfumes stores on the premises and found a few discontinued Tom Ford Private Blends to sniff, at The Cosmetics Company Store. They had Velvet Gardenia, Noir de Noir and even Moss Breches.

The outlet center was followed by Target to shop for essentials (the husband and I are the kind of people, who think that importing things like dental floss and pretzels is essential, we are strange like that), so this Friday was decidedly low brow. (Although I think the makeup brushes and hair brush by Sonia Kashuk are great!)

We drove into the city after lunch and returned the car. After checking in at the W Hotel (the location of Bliss Spa!), I immediately started the perfume hunt and dragged poor Dr O with me.

Soho and Nolita sounded like the perfect place to start, so we took a cab downtown. On the way to Le Labo, I saw the newly opened boutique of Atelier Cologne with its lovely blue door. 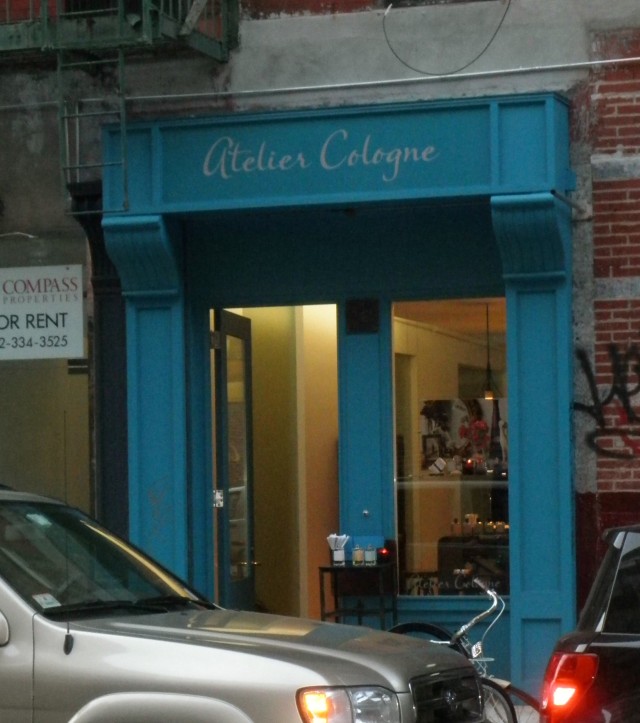 Le Labo is a beautiful store, I love how it is decorated. My husband insisted on getting me his favorite perfume, since it is only available there – Tubereuse 40. Thank you!

Inside the Le Labo store

The Husband wonders if he could use his favorite Calone 17 room spray as his signature scent... 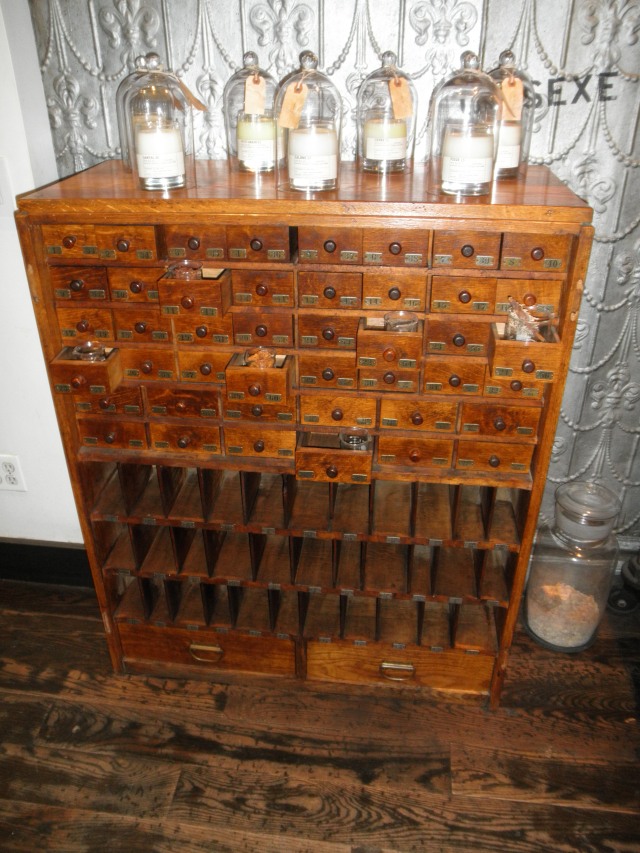 Then we wandered over to Aedes de Venustas. The store is decorated like a royal boudoir, very elegant and luxe, and they carry many niche lines, although aside from Santa Maria Novella, there was nothing totally new to me. A good thing! 😉 I should have gone to MiN New York as well as long as I was in the area, but I forgot and didn’t get another chance, unfortunately.

On Saturday I met fellow blogger Joey of Beauty, Bacon, Bunnies and she took me under her wings and showed me around the Beauty and Fragrance level at the mothership – Bergdorf Goodman’s. 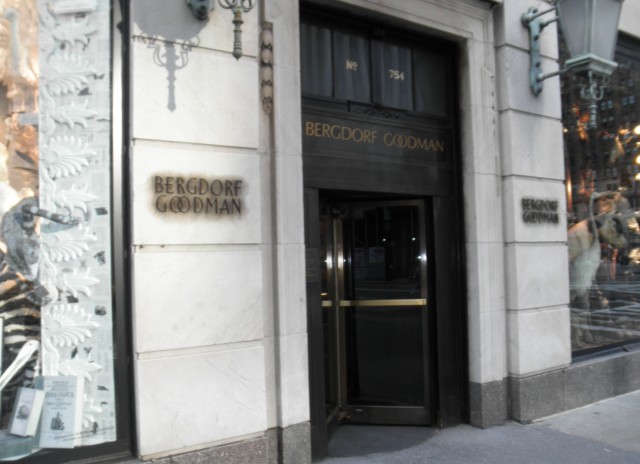 First stop was the Guerlain boutique, where we met the nicest SA, who immediately clocked my accent and placed me squarely in Vienna (I have to work on that!). She turned out to be German, living in the US for the past 38 years though.

I had planned to treat myself to one Guerlain perfume, I was not sure which one though, but re-smelling Jicky in extrait on the one hand and EdT on the other, left me no choice than to go for the parfum. The EdT just doesn’t compare. So I became the significantly poorer, but delirioulsy happy owner of a quadrilobe bottle of Jicky extrait.

Next we took a peek at the By Kilian solids in very pretty compacts, but I prefer liquid perfume in almost all cases (Aftelier soldids are the sole exception for me so far).

Amouage was out of Opus IV, which was a good thing, I don’t know whether I could have withstood the temptation. Dee’s repeated hymns of praise have been whittling away on my resistance, and being away from home, it is always easier to spend money, but as I said, I was saved by Bergdorf’s paring down their stock. (They said they won’t carry the Opus line anymore, sad…)

And then came the highpoint of the tour – the JAR experience.

We have all read about J. Arthur Rosenthal’s (in)famous line of perfumes – super-exclusive and super-expensive.

We sat down in a velvet covered alcove, on a table before us the famed glass cups holding perfume-soaked velvet cloths. One after the other, each cup is opened and presented to you and you may smell what is inside. Only then you may know the name, but nothing else. After the first round, you can say which ones you’d like to smell again and then choose the one you like most, to wear on skin.

The bottles of JAR perfumes are beautiful, simple, but gorgeous smooth bubbles that lay on their sides and come in a purple velvet pouch. One ounce (30ml) of pure perfume is 465$ (plus tax). So, the secret is out! 😉

My favorite was called Diamond Water, I also liked Shadow and Jarling. Golconda (Joey’s favorite) and Ferme tes Yeux were very interesting and I’m sure, given the chance to get them to know better, I’d love them too. I didn’t particularly care for Jardenia and the nameless, symbol only, one (There is only a bolt of lightning on the flask, this perfume is as nameless and the man who use to call himself Prince.)

I was fully expecting NOT to be wowed by JAR, but I must say, these are beautiful perfumes, interesting all of them and obviously expensively and well made. That said, I still think they are incredibly expensive though.

A big Thank you! to Joey, who took the time to meet me and show me her favorite hunting ground. We were not yet quite done, though…

Watch out for Part II coming up soon!

I'm on a journey through the world of fragrance - come with me!
View all posts by Olfactoria →
This entry was posted in Dior, Guerlain, Le Labo, Shopping and tagged Dior, Fragrance, Guerlain, Le Labo, New York, Perfume, shopping. Bookmark the permalink.

38 Responses to My New York City Sniffing Tour – Part I