Editor’s Note: Due to Tara’s travelling to Vienna this week, we have her traditional Thursday post on a Wednesday. Enjoy!

The last two fumie get-togethers organised by the wonderful Pia of Volatile Fiction have been an absolute blast. They basically involve a bunch of fragrance fanatics from far and wide being let loose in London for a summer’s day of sniffing, sampling and all-round indulgence. 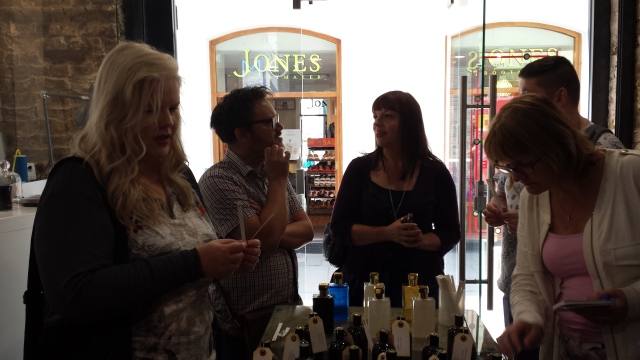 Well, this year’s event was bigger and better than ever despite an all-out strike on London Underground. What made it extra special was that we were holding it on a weekday so that OT and Australian Perfume Junkies‘ very own Val the Cookie Queen could join us while she was over from Austria, along with her gorgeous daughter, Hannah.

Most of us convened at around 11am at Penhaligon’s in Covent Garden’s Market Buildings, where Nick is the Global Fragrance Ambassador and staff trainer. We were downstairs in the basement where Nick laid out a large array of Penhaligon’s and L’Artisan Parfumeur fragrances for us to try (both are owned by the same company).

The light suede base of Iris Prima is a particular favourite of Pia’s, while Hannah was very taken with the fruity pick-me-up of L’Artisan’s Haute Voltige. She clearly takes after her mother because she said it reminded her of Christmas trees and it turns out there is indeed fir balsam in the base.

I tried Penhaligon’s Peoneve because I know Thomas is fond of it. It’s very fresh and green and their biggest seller in China according to Nick (and he would know). Val was impressed by L’Artisan’s Traversée du Bosphore and we all sampled Penhaligon’s new Rose Privée which is a very nice rose on a bed of soft hay. Their spring release, Ostara, is an extremely realistic daffodil scent.

Before we left, I bought a bottle of Tralala for a couple of friends to split.

Round the corner from Penhaligon’s at Langley Court is the new branch of Bloom Perfumery. They are the only stockist in the UK of Vero Profumo and some of the many other brands are Arquiste, Parfumerie Generale, Etat Libre d’Orange, Frapin and Phaedon.

The owner, Oxana, helpfully took us through a few new releases including Panorama by Olfactive Studio which is a shimmering bright green with a wasabi accord. We also had a preview of the next fragrance from Arquiste (caramelised/woody) which will come out in September.

Oxana told me that Bloom are working with a perfumer to launch a bespoke fragrance service soon.

After lunch at Bill’s (and much fun and laughter) we headed to Fortnum & Mason on Piccadilly, which has recently refurbished its perfumery department.

They still have the Caron urns and brands like Grossmith and Creed, but they now have a small section for newer lines including 4160 Tuesdays and Heeley.

After some top quality Fortnum’s ice-cream to-go, most of us headed back to Bloom. We were going to meet Antonio Gardoni of Bogue Profumo whose extraordinary fragrances are now being stocked there (read Michael’s fab review of MAAI here). I’d heard great things about Antonio and he turned out to be even more engaging and down to earth than I’d expected.

Antonio said he thought it would be interesting to breakdown some of the different elements of MAAI for us. First he sprayed the original 40% version before distillation onto paper strips. Obviously this was powerful stuff but still smelt great. At first, he wanted to give the fragrance an incense base, but instead decided to go with a mixture of infused resins and sandalwood from China which we got to try in isolation.

On more blotters, he shared the tuberose absolute he uses in MAAI at 30% dilution. This was strong enough to knock your socks off but still fantastic (I have recently learnt that it’s only heady, synthetic tuberose I have issues with). This was a very green tuberose with an earthy facet. I think I saw Thomas swoon a little.

Next Antonio sprayed a solution of the four different aldehydes used in MAAI. I thought this might be pretty sneeze-inducing, but they were the more vintage-style, soap bubble type and actually rather gorgeous. Suzy remarked that she’d love to wear this as a perfume. 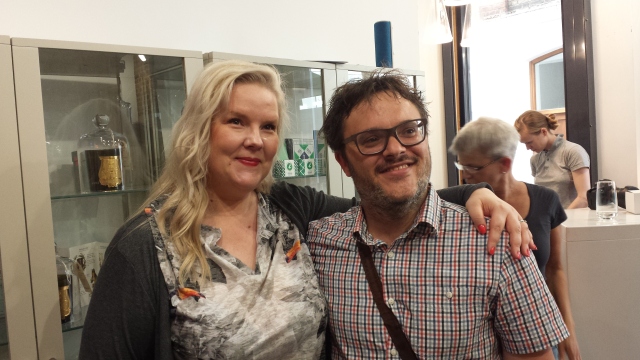 I mentioned to Antonio that I felt MAAI was like several different fragrances in one. He told me that’s not what he set out to do but it turned out that way. He loves fragrances that evolve over time and MAAI changes a lot as it develops. It won best Niche/Artisanal Fragrance in the Basenotes Reader Awards 2015 and is well worth experiencing if you get the chance.

Antonio kindly gave me a decant of his other fragrance, O/E and I asked if he would tell us about it. He explained that he loves citrus fragrances but they usually don’t last long. He told us O/E has every citrus fruit you can think of (lemon, lime, tangerine, grapefruit, mandarin, sweet and bitter orange…) as well as a number of different herbs.

Antonio particularly likes the smell of rotting lemons and thought it would be interesting to create the effect of a lemon that was beginning to rot, being wrapped in a plastic bag. So he put in a little camphor which is a favourite aroma of his.

He then added Iso E Super to give the naturals a synthetic contrast. To extend the longevity, he made clever use of balsams. These are present from the start, so that even when the citrus has faded, you think you can still smell it.

It was wonderful to learn more about both MAAI and O/E first-hand from their creator.

Of course, we all had to pose with the Bogue Mask; a striking terracotta aroma diffuser which is actually a really effective way of experiencing scent.

So pretty! (Explanation: the captions have not been written by a vain Tara, but by Olfactoria! 🙂 )

Before most of the group went off to the pub (I hear a number of cocktails were consumed) Thomas introduced Val to his beloved Thierry Mugler Angel for the very first time. I was not terribly hopeful about this because Val is very much wedded to her enviable Vero Profumo collection and it takes a lot for her to give skin time to anything else. Well, after some cautious sniffing Val declared that she “certainly didn’t hate it” which I took as a positive reaction 🙂 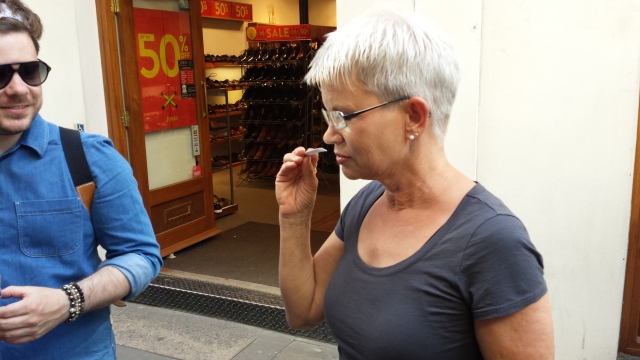 A hopeful Thomas and a very skeptic Val.

Thomas gifted her his bottle so who knows, it might grow on her.

After a non-perfume shopping spree, Val, Hannah, Yasmin from Bloom and I had a quick coffee with Antonio before saying goodbye. We stumbled along what felt like a very long walk back to Euston Station at about 8 o’clock – thoroughly exhausted but completely happy.

The whole group at Fortnum’s.

Many thanks to Pia and Nick for their tremendous organisational skills and to everyone who came along for making it such an epic day. Special thanks to Antonio Gardoni for his fascinating Bogue masterclass.

Have you been perfume shopping in London? Have you tried any fragrances from Bogue Profumo?

I'm on a journey through the world of fragrance - come with me!
View all posts by Olfactoria →
This entry was posted in By Tara, Shopping, Travels and tagged Antonio Gardoni, bloggers, Bloom Perfumery, Bogue Perfume, Fragrance, London, Penhaligons, Perfume, shopping, Travel. Bookmark the permalink.