Russian Tea made several bloggers’ Best Perfumes of 2014 lists and having a fondness for tea fragrances myself, I was keen to check it out.

Masque Milano was started by two young Italians, Riccardo Tedeschi and Alessandro Brun. The collection represents “the opera of their lives” with each scent having an Act and a Scene number. 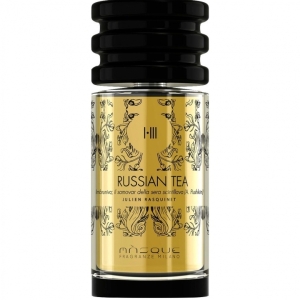 They launched their first fragrance in 2013 and Russian Tea (Act 1, Scene III) is their fifth.

Russian Tea sets out to tell a story from the 18th Century about camel caravans transporting tea from the East to Europe via Russia. It was said that the cold, dry climate of Siberia imparted a delicacy of flavour to the tea, which was unloaded onto the snow-covered steppes each night. It was also believed that the leaves were infused with smokiness from the campfires.

Perfumer Julien Rasquinet also sought to encompass the warmth and comfort of the Russian tea ritual. The leaves were brewed in a pot and a little of this concentrate was poured into cups. Hot water was then added from a samovar (a traditional metal urn) with sweetness coming from sugar, honey or raspberry jam.

However, these tales are likely to be largely the result of romanticism. In her post In the Search for the Perfect Berry: Raspberry, Undina tells us she has no knowledge of these fables about “Russian tea” despite growing up in that part of the world.

Backstory aside though, what is the fragrance actually like?

Well, for a start, it is actually leather rather than black tea which constitutes the body of the fragrance.

I was apprehensive about the mint and I can’t say I found it an enjoyable experience, although it didn’t last long. The opening stage is bracing spearmint over smoky birch tar.

Russian Tea settles into a gently spiced, soft smoulder with enough sweetness to counteract any bitterness. I find it comfortable to wear however it’s less cosy than Tea for Two. It has that seat-by-the-fireside warmth but it is also evocative of a cold starless night in the hinterlands. It’s quieter and lacks the strong cinnamon overlay of the L’Artisan.

The labdanum comes through in the base and works well with the smoky leather.

I was really looking forward to the raspberry note but sadly I fail to pick it up.

I find the lasting power is excellent while it has a fairly moderate level of projection. I would say it leans towards masculine, particularly in the beginning.

Russian Tea possesses a mysterious mood and is distinctive without being loud or showy. I would have preferred to get raspberry infused tea but it is sophisticated in its mellow, enigmatic way.

Have you tried this or any of the other Masque Milano fragrances?

I'm on a journey through the world of fragrance - come with me!
View all posts by Olfactoria →
This entry was posted in By Tara, Fragrance Reviews and tagged Fragrance, Masque Milano, Perfume, Review. Bookmark the permalink.