Today I want to show you two scarves that have boats as their theme. They are very different, but both happen to feature boats and birds. It is a long post (to make up for last week! 😉 ) and rather picture-heavy, so I hope you stay with me!

Tous le bateaux du monde (all the boats of the world) was designed by Aline Honoré. 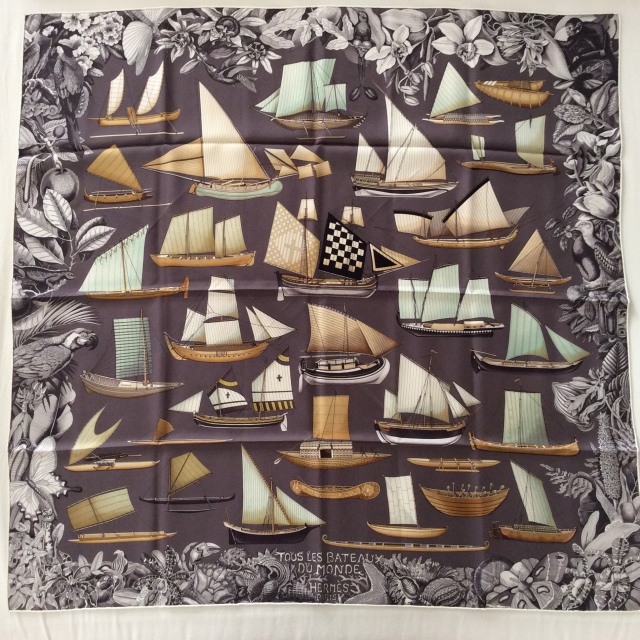 The title of the scarf is written on the bottom center of the border in what looks like corals.

Honoré is famous for her intricate drawings of plant and animal life, and despite the boat theme, she managed to insert her favorite kind of illustrations on the border of the scarf, thereby combining two rather different themes into a harmonious whole.

The more graphical sail- and rowboats are bordered by a wild jungle full of hidden creatures, birds and monkeys sitting in the lush vegetation of a flowering thicket. The trick is to keep the border in black and white as to not overwhelm the eye and letting the boats shine and take center stage (quite literally) while the jungle acts as enhancement and subtly draws the eye.

As always when folded, the picture changes and the border is way more prominent, we get to discover a monkey or a parakeet when we initially thought this was all about boats.

I got this scarf a few birthdays back as a gift, but to be honest, I really picked it out myself. (I ruthlessly exchanged the one I received by my mother in law, since the one she picked didn’t suit me in design or colour, sorry MiL!)

I initially chose Tous le bateaux because of its fabulously neutral colours, I figured the taupe background and black and white border would go with everything and be elegant to boot. I was right about that, but the reason I love it now is the ingenious way I always find a new detail to admire every time I wear it. Can you imagine that I didn’t even see the monkey in the upper right corner until my son pointed it out to me one day?

We can be so blind to the beauty around us and forget about details by always looking at the bigger picture, which is something children never do. They see the small things much better than we can and I’m glad having help in discovering them.

The parakeet above is giving us the evil eye…

Aline Honoré’s signature is in the right bottom corner of the scarf amid the vegetation.

The second scarf of the day is a special one (I know I say that about many of my scarves, but isn’t that the beauty of it?).

Let me tell you the story of this one.

When my dear friend Tara was in Vienna in March, we went into Hermès (duh!) and she wanted to look at some scarves. I was under the impression that she was looking for herself and so I tried to find something to suit her. She on the other hand was stealthily trying to find out what would be my favorite among the options we saw. When she got me to state my choice, she picked it up and told the SA to wrap it up as a gift to me.

So you see how special both this scarf and Tara are!

This scarf is called Bateau Fleuri (Ship of Flowers) and was created by Ljubomir Milinkov.

This is what Hermès says about the design which was released this spring season.

Designer Ljubomir Milinkov owes his lifelong love of nature, flowers, and fields of wheat to his home village of Sovac, in the Serbian province of Šumadija – the inspiration for the fresh, poetic touch and gentle humour suffusing his work. There’s a hint of Sixties and Seventies ‘Flower Power’, and Milinkov’s delicate, precise line hints, too, at the distant influence of Orthodox icon painting. In 1962, aged twenty four, he left his native Serbia to pursue his dream of becoming a painter in Paris. Soon, the irresistible lure of New York drew him further West. He moved to the States, and held his first exhibition in 1972 at the Masur Museum of Art in Monroe, Louisiana. Returning to France, he was commissioned by Jean-Louis Dumas to design his first carré for Hermès – Jardin enchanté – in 1986. Ljubomir’s Bateau perfectly encapsulates the artist’s world: a delightful voyage aboard a ship fitted with sails of flowers, in a sea of butterflies, fish and multicoloured birds. Like a wandering, waking dream…

I want to show you a few details of this scarf as well. Above is the name of the scarf and small blue butterfly over the main background of wavy ocean. 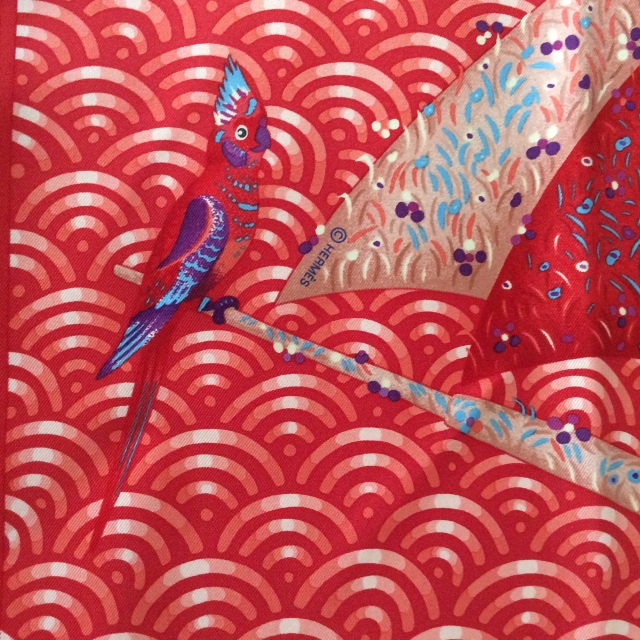 This gorgeous parakeet is sitting on the prow of the ship… 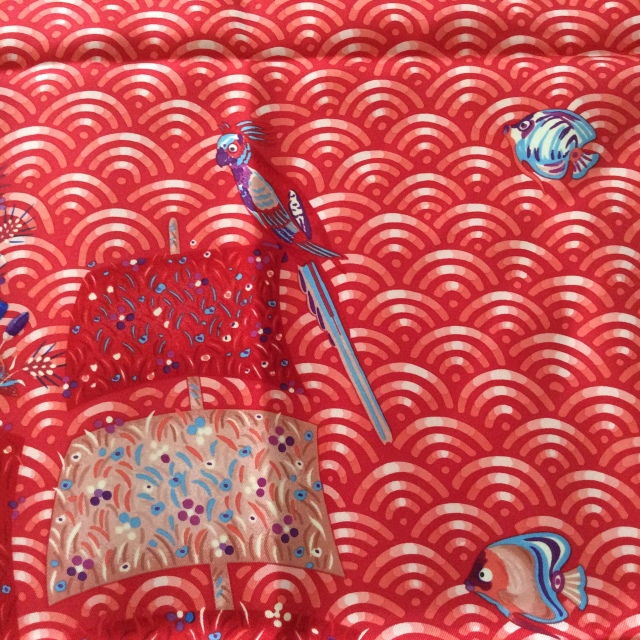 …and this one is high up on the top sail. 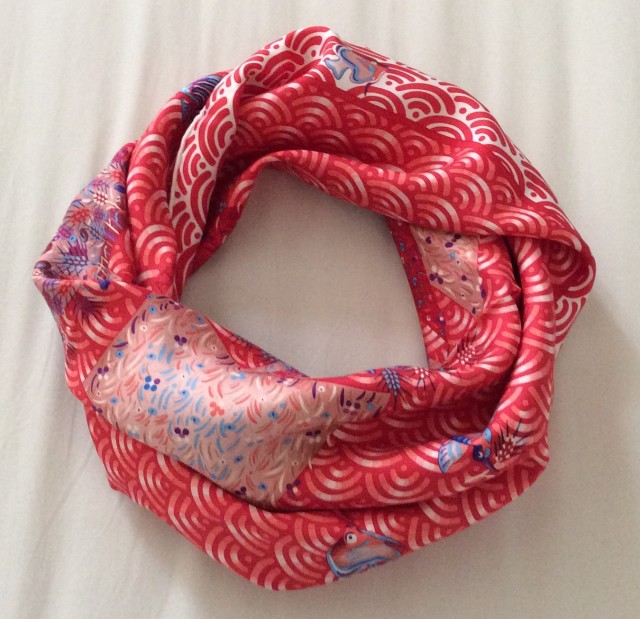 When folded like you see above, the waves (that remind me of Art Deco fabrics) are most prominent, but if you hide the ends, like in the photo below, you get the sails of the ship, inlcuding more colours than the dominant red. The sails are pink, powder blue and a dusty greyish lilac.

This scarf makes me smile. It is not only a pretty scarf but a reminder of a wonderful friendship across an ocean (well, the channel counts!).

I'm on a journey through the world of fragrance - come with me!
View all posts by Olfactoria →
This entry was posted in Hermès, Scarf Collection, Scarves and tagged Hermès scarves, Hermes, scarf collection, Silk scarves. Bookmark the permalink.