In Part Three of my collection posts, we move on to the next size up, the so-called vintage silk 70x70cm scarves. This used to be Hermès’ standard size in the 1950ies and onward until the seventies or so, before the larger 90×90 size replaced it. It was re-introduced in 2007 for the 70-year celebration of Hermès silk scarves. Since then a few designs have been released in this size every year.

Today I present to you a scarf that I find simply wonderful.

Heritage, tradition and a deep commitment history is what characterizes Hermès, but it is not everything. A sense of humour, a willingness to stay contemporary and a certain daring are part of what makes Hermès designs unique.

This scarf is called Minuit au Faubourg (Midnight at Faubourg) and is drawn like a comic, even using comic sans font for the title and the signature at the bottom.

This colourway is my favorite (it was released in about ten different colourways, most of them much louder than mine), it is essentially black and white (or shades of grey) with accents of yellow. 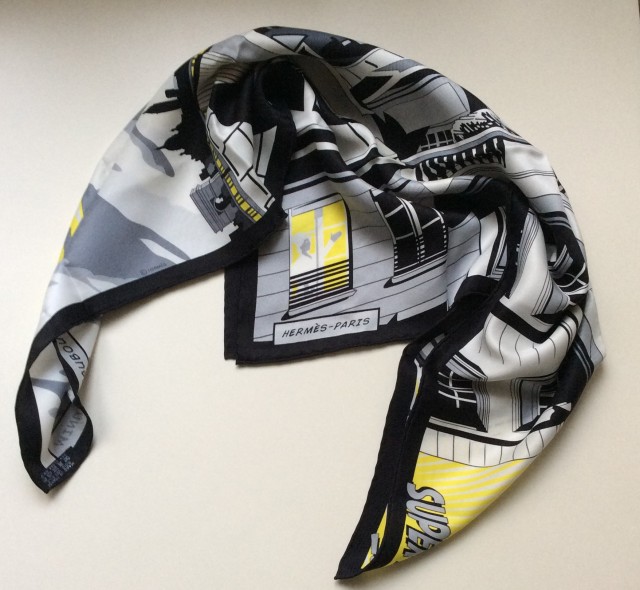 This is a scarf I seriously contemplate hanging on the wall, since it really is all about the motif. Above you see it tied. It loses a bit of its punch, but it is still a fabulous, neutral scarf that goes well with just about anything, the yellow giving it a little kick.

I couldn’t resist doing lots of detail photos for this one, since there is so much to discover and last but not least, this scarf is pure fun.

The horse on top of 24 Faubourg is really there on the actual building in Paris (as well as on the Madison Ave, NYC store) and normally bears a rider that is not on his horse in this scarf, but standing in the window. The horse is wearing the cape and eyemask of a superhero. It is being called to save Paris by the light being shone into the night sky from the Eiffel Tower.

On the detail below you can see the signature of the artist, Dimitri Rybaltschenko, and maybe the man himself standing in the window?

I was looking for this colourway for quite some time until it luckily popped up on h.com and I snapped it up. The fun with Hermès is, finding a particular item is always a hunt and you never know what you are getting, when and where (and if at all!!!).

As per your wishes, I include a photo of myself wearing the scarf here in a simple knotted loop. The scarf is first folded into a strip and then wound around the neck twice and secured with a double knot.

Minuit au Faubourg is surely not a classic design, but I love how it conveys the way Hermès is not a staid, unmoving entity, but a modern brand that doesn’t take itself too seriously. Instead of basking in old glory, they continuously try to stay innovative and thus offer something for everyone.

What do yo think about this unusual (for such a venerable brand) design?

Do you like it? Or do you think Hermès should stay with bridles and birds?

UPDATE: Thanks to commentr happyface, here is a link to a lovely little video about this scarf.

I'm on a journey through the world of fragrance - come with me!
View all posts by Olfactoria →
This entry was posted in Hermès, Scarf Collection and tagged Hermès silk scarf, Hermes, scarf collection. Bookmark the permalink.