I am a lucky woman in so many respects. The most fabulous one of them all though is surely my husband. (I know Portia would agree! 😉 )

The good husband works like a madman during the week – and often the weekends too – to keep us well-fed and clothed but he also endeavours to make us happy. One way to do that is going on a trip to one of my favorite cities (along with London) in the world – New York.

A few days in NY are an infusion of vigour, youth, beauty, culture and sheer glee that holds over for a long time, even when routine and daily drudgery have us firmly back in their claws.

We started off on Thursday morning after saying Goodbye to our boys at their respective institutions of learning from which my dear parents in law would later pick them up and feed and put them to bed at their house for the next five days. Yes, I am lucky in that respect as well.

Our takeoff in Vienna was delayed by one and a half hours as our plane had to be exchanged for reasons of mechanical failure. Well, I say it is a good thing they clocked that problem before we were in the air! It was the only glitch on an otherwise perfect trip.

We arrived at JFK later than expected, but well rested as we were flying first class (Love those airmiles! Lucky again! 🙂 ). We picked up our rental car and were off upstate to Woodbury Commons, the biggest outlet center in the States. Black Friday sales are so unbelievable, we went home with a year’s worth of clothing for the boys and ourselves for under 500$.

The next day, after a stop at Target (which must sound rather ridiculous for American readers, but it is really lovely to go there if you don’t always get the chance, I love buying groceries and toiletries I can’t get here), we drove to the city, got rid of our car and checked in at The Algonquin.

Yes, The Algonquin! A adore this hotel ever since I read my first New Yorker Magazine, or Anne Sexton’s biography… a house with such rich literary history fascinates me and I was very excited to be staying there. They have a cat named Matilda who lives in the lobby and she knows she is a queen the way she behaves. I have never met a more arrogant cat, but in a good way, you know cats… 😉 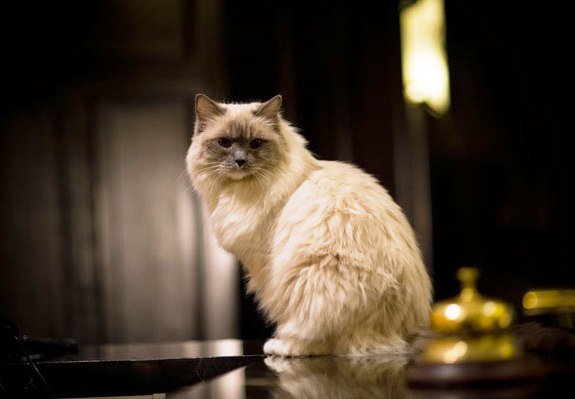 That first night in the city, Friday, we met with Daisy (Cool Cook Style) in the West Village to have dinner at a fantastic Asian Fusion restaurant called Red Farm. The food was amazing and we had plenty of it. Daisy is dangerous when it comes to food, she can’t be trusted not to order one of each off the menu and totally loses her cool when the artfully styled courses arrive. I love Daisy!

The next day we met with Portia (Australian Perfume Junkies), Gaia and her husband (The Non-Blonde), Daisy, Joshua (the Smelly Vagabond) and Ari (The Scents Of Self) and a bunch of lovely OT readers (Hi hajusuuri, Fleur de Lys, Poodle! Thanks so much for coming!) at Osswald Perfumery in SoHo. Josie was the lovely host there and it was great fun, although the oud concentration in the air was worth at least a few hundred bucks! Fresh air never felt so good! 😉

The evening saw a dinner with Portia and her crew, Daisy and Hajusuuri at The Empire Diner. Again, Daisy flipped her lid when food arrived at the table. Never seen a cuter (and more unsettling at the same time!) sight. The woman really is a foodie through and through. Have I mentioned that I love Daisy?

Speaking of food: we had the best, best, best ever burger of our lives (and there have been a few!) at Shake Shack in Grand Central Station. It was awe-inspiring indeed. (Slowly I start getting Daisy’s enthusiasm…)

Totally high from this wonderful experience we went for a repeat performance of the great Shake Shack Burger and then back to the hotel.

What I have totally left out of my tale so far was the great Hermès Hunt Of 2014.

True to form we went to all three Manhattan boutiques (Madison Ave, Wall Street and the Grand Central station pop-up store called The Silk Bar) as well as the airport duty-free in search of a specific scarf.

And all that although I had already cleverly engineered for meeting my upcoming scarf needs from back home by having Daisy order one online and send it to the Madison boutique and M having his friend Dan do the same from New Hampshire. So two gorgeous 90×90 scarves made their way into my collection. 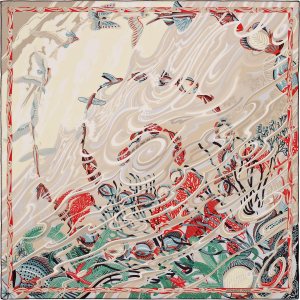 And this one: Mythiques Phoenix

The funny thing is that M really enjoyed the hunt. I guess this is what Hermès is really good at, make you sweat for it (not only pay through the nose, no that would be too easy!). But it also makes it special, since every scarf holds a specific story of how it came to me.

And this also brings us around to where we started this long post today: I am lucky to have my husband. Thank you, M!

And many thanks to you, dear readers for sticking with me through a thousand words, none of which was perfume. 😉

P.S.: Look out for a post by The Husband on Friday! The guy is really funny… 😉