Posted on November 6, 2014 by Olfactoria

Last Thursday I saw on Twitter that Odette Toilette had a last minute spot available on her day trip to the Osmotheque Perfume Museum and Conservatory. I messaged her straight away and took the place. Exciting!

Therefore, (not so) bright and very early on Monday (6.30am) I joined about 20 other fragrance fanatics to board the Eurostar at St. Pancras International in London. Odette was concerned her sequined skirt looked a little “walk of shame” at that time in the morning but I thought she looked great. 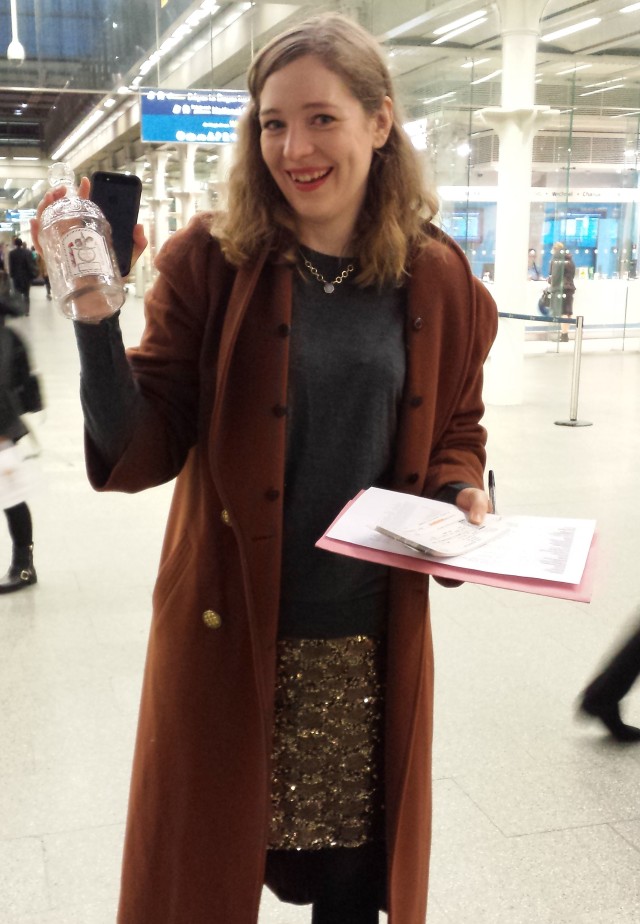 Odette Toilette at the Eurostar Terminal

The roughly two and a half hour journey went surprisingly quickly and there was a coach to meet us at the Gare du Nord. We set off for lunch at a restaurant based inside an art gallery just across from the Seine. The meal proved interesting. We had to pick our courses in advance but there was some confusion over the French translation. 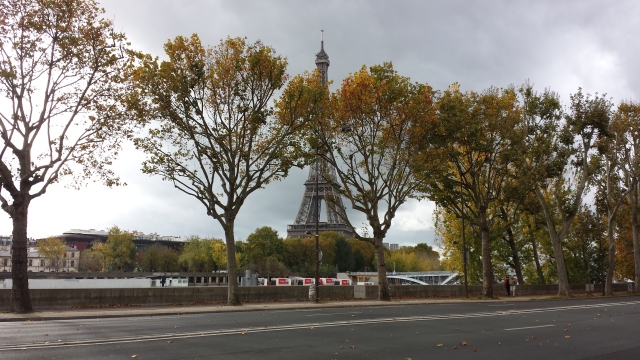 A view of the Eiffel Tower and the Seine in passing

Luckily I had Vanessa from Bonkers About Perfume to advise me, being a fluent French speaker. She advised me to go for the celery and chestnut soup for starter and avoid the raw radishes with butter. This turned out to be a good move. The one word I kept hearing on the train home was “radishes”. The dessert of chocolate mousse cake was lovely but after chicken and rice doused in caramel sauce for main, it was rather too much of a good thing. At least I didn’t go for the tapioca pearls… 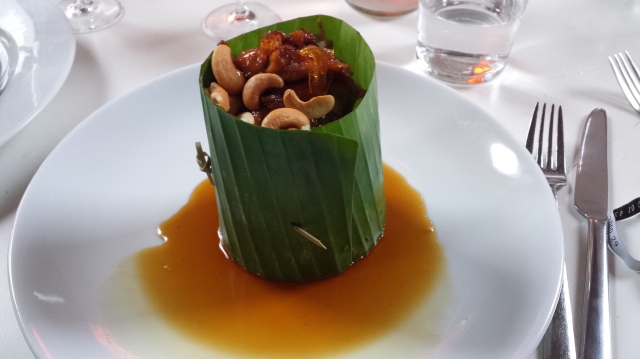 At about one o’clock we boarded the coach again to take us to the Osmotheque which is in Versailles (home of the Palace) about half an hour outside Paris. Odette had warned us in advance not to expect a visual spectacle but we were so hyped up we soaked up everything including the books, bottles and raw materials on display. 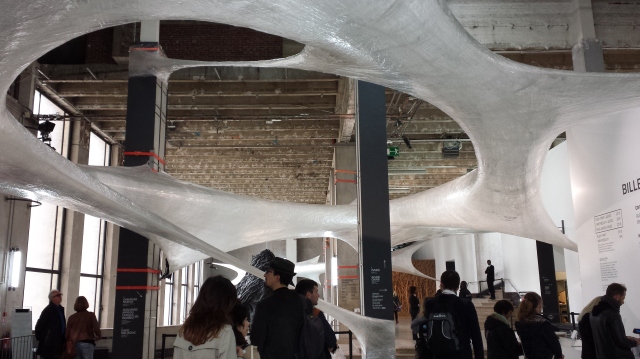 We then went thorough to a lecture room where Patou perfumer and Osmotheque curator, Thomas Fontaine, took us through around 30 vintage perfumes.

Thomas was nothing short of wonderful. He was extremely open about his profession and in touch with the sensual side of perfume. 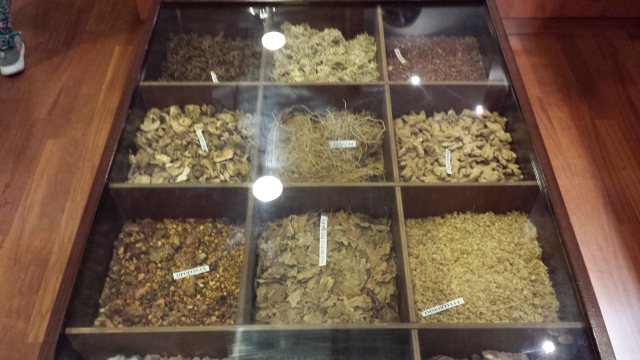 First we watched a short film about the Osmotheque, which has been conserving fragrances for the last 25 years. Afterwards Thomas gave us a brief introduction to perfumery through the ages and then the sniffing commenced in earnest.

We each had a holder of little envelopes in which to slip the paper strips with perfume that were handed around so we could experience the drydown later. Thomas told us a little about each one with a screen showing factual information and pictures of the bottles. Now I hope M. Fontaine will forgive me for mangling his words but the following will give you an idea about some of what he said. 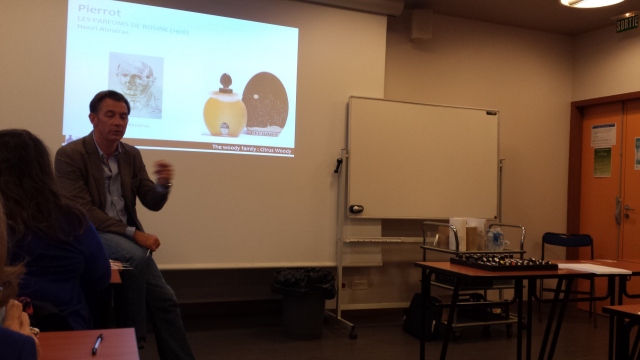 Thomas: This fragrance features citrus notes but it is also very spicy. Clove and cinnamon are known for their anti-bacterial properties so this eau de toilette was used to help people keep clean.

Thomas: Legend has it that in the Middle Ages at a time of disease thieves were stealing and not getting infected. The police asked them how this was so and they claimed it was a fragrance of spices suspended in vinegar.

At the time this fragrance was launched there was not much of a distinction between perfumers and pharmacists. Many pharmacists created perfumes for medicinal purposes.

They were using naturals but when synthetics were developed this opened up whole new ideas. The first important new molecule was coumarin which was first synthesised in 1868 and many more followed such as vanillin, ionones, synthetic musks, aldehydes, linalool and more recently, ambrox. 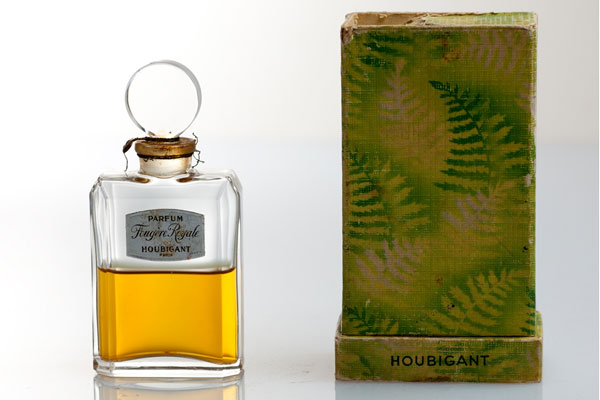 Thomas: This is 50% coumarin and a new accord was created – the fougère.

Thomas: Well, you could re-create it the same as this version but you couldn’t sell it because of IFRA and EU regulations. They are becoming more restrictive and it’s becoming harder and harder for perfumers. We came close to not being able to use any natural rose and jasmine recently because they contain allergens for 0.2% of the population.

We are not such a big lobby as the cigarette manufacturers. In France 70,000 people a year die from smoking but this product is still on the market. 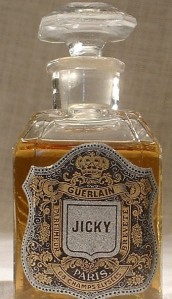 Thomas: This was created by Aimé Guerlain and is an example of vanillin and coumarin. A lot of men love it, I even wear Jicky. Guerlain went on to create a similar fragrance called Mouchoir de Monsieur. 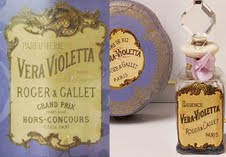 Thomas: This means “Real Violet”. It was the fist fragrance to use the new molecule, ionone to recreate the smell of violets.

Thomas: In iris you can smell a violet element. But using ionones is a lot cheaper than using orris root which is the most expensive natural in the world. Synthetics made fragrances easy to read. Naturals need synthetics to develop and synthetics need naturals to add richness. 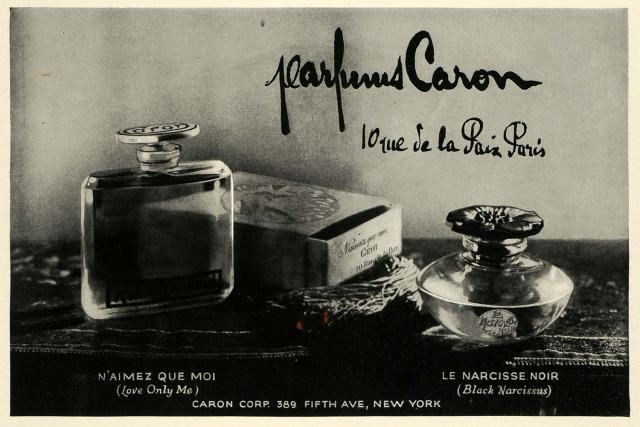 Thomas: This has a lot of narcisse and some tuberose. The modern version has more tuberose, which is cheaper. 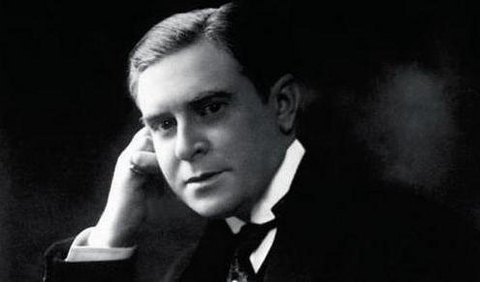 Thomas: Francois Coty introduced sensuality into perfume. He created a company at the beginning of the twentieth century which revolutionised the industry. He created so many new and important fragrance families including ambers and chypres.

Perfumes were still copies of nature however. Abstraction didn’t come till later with perfumes like Chanel No.5. There were a lot of soliflores on the market.

Thomas: An amber accord was created using vanillin and labdanum. The vanilla contributed sweetness and the labdanum contributed warmth. This inspired new fragrances such as Shalimar which added bergamot and Habanita which added vetiver. So the accord is developing with each new creation. 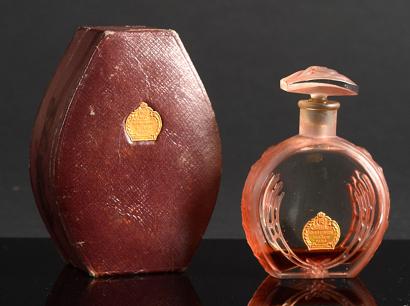 Group member: Can you recreate the very old perfumes and sell them today?

(Editor’s Note: I cannot resist to put in a little, “Ha!” at this point. Was that not what I said? Why did the CEO of Lubin feel the need to publicly scold me for saying so? And yes, I have a hard time forgiving and forgetting… 😉 )

Although I don’t like the word “commercial”. You don’t have to make a perfume appeal to the mainstream for Lubin and Patou. You just need some people to love it. When you make a perfume for Proctor and Gamble it has to sell thousands and thousands, probably more. 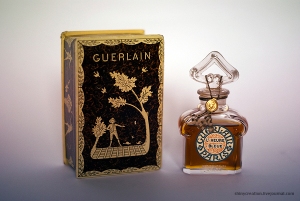 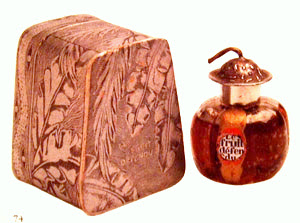 Thomas: Paul Poiret was the first fashion designer to link perfume with fashion. However, he didn’t put his name on the bottles but used his daughter’s name, Rosine, instead.

This is very spicy with clove and cinnamon but also has fruity accords like peach.

A Side Note on Animalics

Thomas: We are animals so we like animalics – except maybe the Americans! Jicky used 1-2% civet. We use cumin because it smells like sweat and we use costus because it smells of hair. We are all driven by odours. 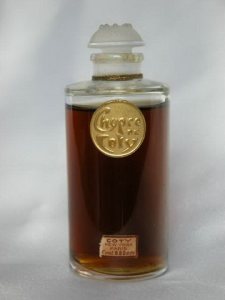 Thomas: Named after the island of Cyprus. It has cistus labdanum, bergamot, rose and oakmoss. For me, the chypre is one of the most sensual accords. 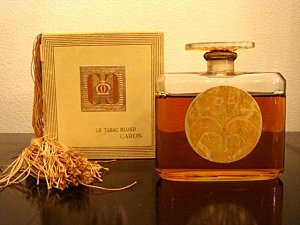 Thomas: Cigars used to be impregnated with civet and most of the tobacco shops in France were called “Civet” . Tabac Blond combined narcisse and civet. One woman who tried this said to me “It smells of my grandmother”. This wasn’t because her grandmother wasn’t clean but because it reminded her of her grandmother’s furs. 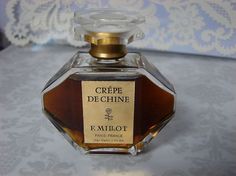 Thomas: In the twenties more raw materials were available from across the globe, from places such as China and the Middle East. 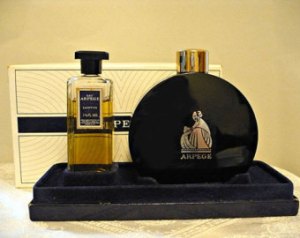 Thomas: Chanel No.5 was the first perfume to use such a large amount of aldehydes. It created a new genre of fragrance – the floral aldehyde. Arpége came along a few years later using the same accord. 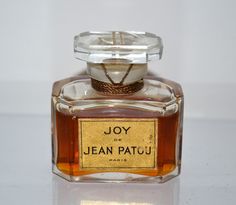 Thomas: This was originally intended as a gift for Patou’s special clients. The perfumer thought it would be impossible to produce because of the expense of his formula which had a 80-90% mixture of rose and jasmine. I smell it nearly everyday and it changes. It has perfect balance. Considering the cost of the raw materials it’s the best value for money perfume on the market today.

Maybe one day we will have to make a big stand against IFRA and the EU regulations because every year there are new restrictions and every year we have to reformulate. It’s a big mess because there are different regulations in the US and Japan but the European rules are the most strict.

Some of the other vintage fragrances we tried were: 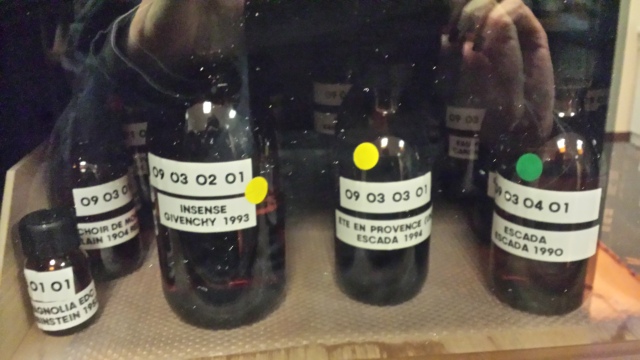 We left the lecture room and had a look around the vault where they keep the perfumes in dark brown bottles in fridges with Argon gas to aid preservation. 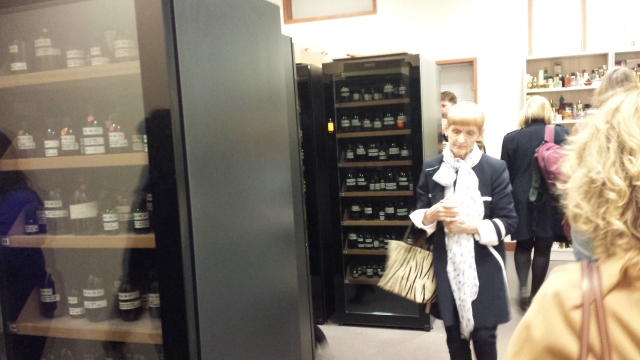 Then it was time to head back to the station to catch the 7.13pm Eurostar home. It was delayed, but once onboard, Odette passed around paper strips with the perfume each person had requested ahead of the trip. 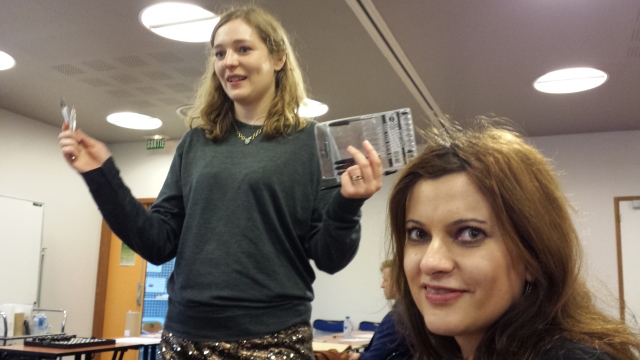 Nick Gilbert got Snuff by Schiaperelli, Katie Puckrik chose vintage Chloe and some others went for long extinct Guerlains. Being a late-comer I didn’t get to choose one but this was the only disappointment of an otherwise truly amazing trip.

Odette opened a couple of bottles of Champagne to celebrate our fantastic day out.

Would you like to visit the Osmotheque? What fragrance would you love to smell in vintage form?

I'm on a journey through the world of fragrance - come with me!
View all posts by Olfactoria →
This entry was posted in By Tara, Travels and tagged Caron, Coty, Fragrance, Guerlain, Houbigant, Lanvin, Lubin, Osmothèque, Paris, Patou, Perfume, Thomas Fontaine, Versailles. Bookmark the permalink.

49 Responses to Visit to The Osmotheque, France – Monday 3rd November 2014