For my last birthday, my dear husband surprised me with the (to be honest somewhat uncharacteristically) romantic idea to go to Paris for a weekend. Of course I was raring to go. I am almost ashamed to admit that I had never been to Paris before, so it was especially nice to get there at last before that ominous mark of turning 40 next year. Somehow it seemed important to me to manage to do some things before that day.

The boys were happy with our lovely long-time sitter, so we happily left Vienna behind on Friday morning.

We arrived at our hotel at 2pm and it turned out that 2pm was also the time we would have to leave the next day to catch our flight back home. So we had exactly 24 hours in a city that offers enough beauty to last a lifetime.

We were staying close to the Place Vendome on rue de Mont Thabor and it proved to be a very good location to venture out from.

That first afternoon we set out with only the haziest of plans, because we wanted to just look, experience and walk without a strenuous schedule. We wandered along boulevard Haussmann, ambled through Galeries Lafayette and Printemps (stocking up on Tom Ford foundation and smelling some niche perfumes, though nothing particularly stood out), then we found our way to the most important address on my personal agenda: 24 rue de Faubourg St. Honoré.

The Hermès flagship store is overun by tourists and therefore especially the ground floor feels a bit hectic. But we found a wonderfully helpful SA on the calmer first floor, Marco Marri Manetti, who assisted me in my quest for one thing that I have been really coveting for months now – a pareo (also to be worn as a big format scarf) called Mythiques Phoenix in Bleu Minuit.

They actually had my pareo in their window, but if you know Hermès, you know that you cannot have stuff out of the window (it would destroy the carefully though out art of window decoration I assume). So the lovely and extremely helpful Marco looked everywhere, he looked some more, but still he came up empty. In the whole of Europe this lovely piece of cloth seemed sold out.

When we were almost out the door, he caught up with us and told us he had found one in the avenue George V store right here in Paris, but when he called he was told it was reserved for someone else already. Very disappointed we went on, but the beauty of Paris and the gorgeous weather leaves no room even for Hermès related doom and gloom.

Our next destination was the Palais Royal and the boutique within that Perfumistas the world over dream of visiting – Serge Lutens. It was as dark, as purple, as hushed as imagined. The SA’s were very nice and left us alone while sniffing the provided mouilettes. The spiral staircase is truly impressive indeed.

We then enjoyed our walk home to the hotel where we changed and went out for dinner.

Dinner was a very noble affair. We had made reservations at 1 Place Vendome because we had heard of the excellent cuisine there. The restaurant is gorgeous, it looks like it could have been decorated by Christian Dior himself.

We had the Menu Dégustation, and each and every one of the six courses was nothing short of fantastic (and we are quite critical when it comes to fine dining!). Slightly tipsy from the pink champagne and stuffed to the gills with delicious food we went for a stroll after dinner to walk off at least a few of those calories.

Our stroll led us into the famous rue Cambon, which proved to be just around the corner. We longingly looked up at the windows of Gabrielle Chanel’s apartment above her first boutique.

The cafés on every corner are very inviting, so we sat down for a nightcap. It was the evening of the Football World Cup match France vs. Germany and unfortunately the French lost, which made for a bit of a sad and dejected atmosphere that night. But again we just could not let ourselves be distracted from feeling high on life and utterly happy to be where we were.

The next morning after breakfast at our hotel, we ventured out again, this time with a plan: Hermès at avenue George V was on our agenda. To go there we walked along the Champs Elysées (already being readied for Bastille Day on July 14, the French workers are either very conscientious or very slow), we bought cute Mickey Mouse bathing suits for the boys at the Disney Store (they are a bit obsessed with the Disney Store – there is none in Vienna – so they always ask for a souvenir from there, no matter what city we are in) and marveled at the architecture and grandeur of Paris.

The Hermès store at ave George V is very nice. Smaller, less crowded and we got lucky. The one pareo in the Mythiques Phoenix design apparently left in Europe was no longer reserved and waiting for us. The Bleu Lagon is not the colorway I wanted in the first place, but I am still extremely happy with it. You can imagine the swing in my step when we walked out. 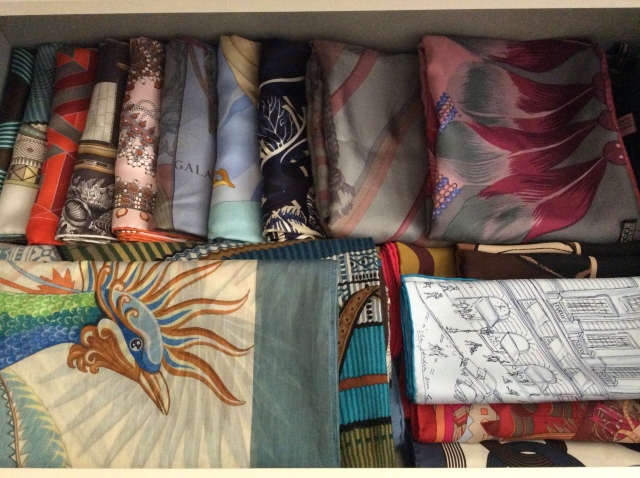 My scarf drawer with the folded Mythiques Phoenix in Bleu Lagon on the left. The light blue gavroche on the right shows the Hermès store on 24 rue de Faubourg St Honoré.

We crossed the Seine into St Germain de Prés and walked along the Quai d’Orsay. Walking along the boulevard Raspail we “happened” upon the third Hermès store on Rue de Sévres (so no accident, my dears! 😉 ).

This is the most beautiful store of the three. It has been renovated a few years back and focuses on the Hermès home line. The decoration is truly awe-inspiring and even my husband was very glad we saw this as we felt it honored the flair and feel of this luxury house best.

Crossing back over the river at Pont Royal, we had a great lunch of Steak frites (for him) and carpaccio (for me) close to the Tuileries. A final stroll through the neighborhood there revealed Colette, a depot-vente (a second hand store) that seemed very interesting and a final cup of espresso at a corner café.

We had to leave for the airport at 2pm again. Those 24 hours felt very short and very long at the same time.

You might say, well you didn’t do anything but run to the maximum amount of Hermès stores?! You know what? I loved it!

I know this was only my first time of many in Paris. It is a city where I felt at home right away, it is very much like Vienna, so I felt very safe there. I know I will be back, and I know I will get to know this city well. It felt perfectly okay to not do all the sightseeing, all the touristy stuff, all the culture… it would not have fitted in the timeframe and would just have left us dissatisfied and inefficient. So we didn’t even try, we just went with what we wanted and it was a great day. 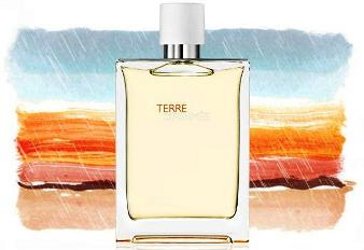 P.P.S.: No perfume? you ask. Fret not, we did get our share of fragrant goodies at the airport. A his’n’hers Hermès package of Terre d’Hermès Eau Trés Fraiche for him (a fabulous citrus scent for summer, I’m stealing it all the time!) and Eau de Mandarine Ambrée for me. Ah, thank goodness, I hear you say, she has not completely lost it…

I'm on a journey through the world of fragrance - come with me!
View all posts by Olfactoria →
This entry was posted in Hermès, Travels and tagged Fragrance, Hermes, Paris, Perfume, Travel. Bookmark the permalink.

50 Responses to Paris In A Day – Olfactoria Travels Again