Vero Kern is one the real gems of the perfume world. She is an amazingly talented and inspiring woman who proves that you can make your dreams a reality at any age. Her perfume line, Vero Profumo, is a master-class in excellence and demonstrates the way perfumes used to be made, but rarely are now. 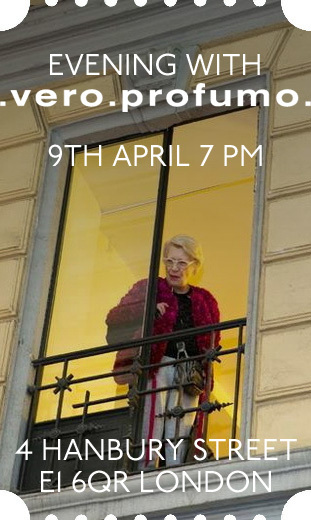 Invitiation to the event, courtesy of Bloom Perfumery London

Onda, Kiki, Rubj, Mito and now Rozy, showcase top quality ingredients in moving interpretations. Her creations go right to the core of your being. Vero is also a fascinating individual as you will have already discovered if you have read her People in Perfumeland profile here on OT. Considering Vero is based in Zürich, I couldn’t miss the opportunity of meeting the lady herself on her recent visit to London. 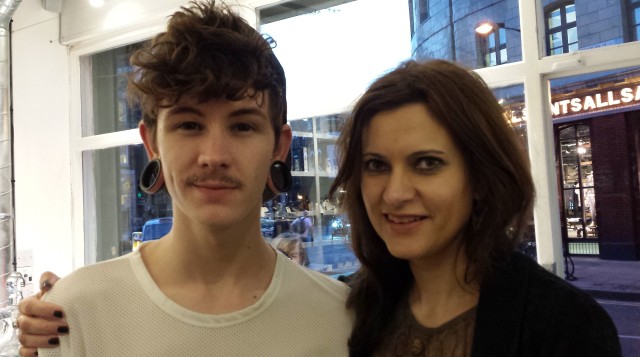 Tara and Freddie of Smelly Thoughts

Vero was at Bloom in east London to hold a workshop and introduce her latest perfume, Rozy. I went along with the wonderful Freddie from SmellyThoughts and his lovely mum, who are both big Onda fans. I also recognised a few other familiar faces among the 20 or so people there; such is the small world of perfume.

Vero was accompanied by Lisa Taylor from Campomarzio70 niche perfumery in Rome and said she was happy for me to roughly reconstruct her words below: 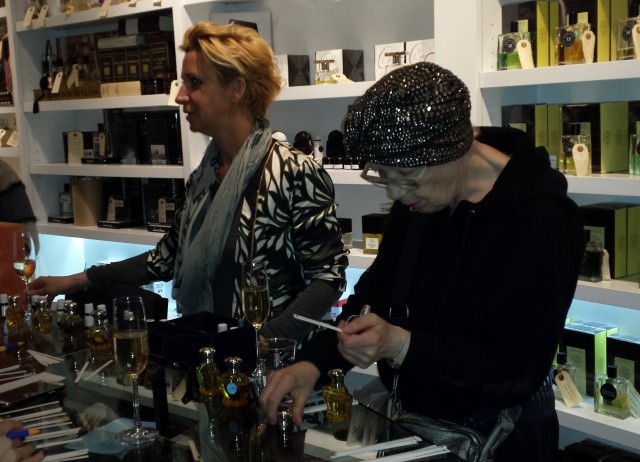 Vero Kern: I got into perfumery through aromatherapy, at the age of 54. I became very interested in the raw materials that had been used in classical perfumery for a very long time. Perfume could not be made the same way after the 1990s because of globalisation. After that, they had to conform to a certain standard from Honolulu to Hong-Kong.

I had a great love of the old Guerlains, Chanels and Carons. The Guerlains are not the same as they were. I bought a lot of bottles from the 90s, but they have been updated since. In a good way I think, to keep up with modern tastes.

However, people like to spray, it’s a cultural thing. So for the EDP I changed the formula a little. The differences are not big but they are there. The Voile d’Extraits have the same composition as the Extraits but at a different concentration.

Vero: Now we are going to do a little test. We are passing around paper strips with a raw material and I want you to write down on a piece of paper two words which describe it.

Tara: I immediately recognised cumin, mainly because I make curry with it. So I wrote cumin – spicy, warm.

Tara: Lisa then read out all the answers which were mostly cumin with a few people identifying it as turmeric or curry spice.

Vero: This has never happened! Amazing! People usually say “sweaty” but cumin is cumin. I guess it’s because you cook with it and have so many Indian restaurants here and smell it in the streets. 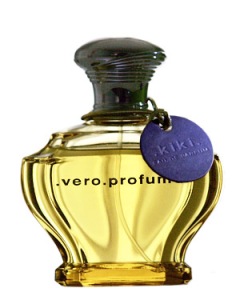 Vero: Now we have a raw material from Kiki to pass around. Can you tell what it is? (General agreement on lavender).

That’s right. There are two types of lavender in Kiki. A steam distilled lavender and a lavender absolute. The absolute is just as the word suggests, it is the whole thing. You see the green colour of the raw material? That’s completely natural.

This is another natural material from Kiki being passed around now. What does it smell like to you? (Most thought it smelt like caramel). It’s a synthetic material called Maltol. It’s like crème caramel.

Kiki was a muse of the photographer Man Ray in the 1920s/30s. She was a very free woman, an artist, a very special woman. This was also the beginning of the feminist movement.

I learnt to make perfume in Paris and I was influenced by Guerlain, which I had loved and had worn for a long-time. So Kiki was also influenced by Jicky which came out in 1889 and is still in production, which is really amazing. Aimé Guerlain named it after a nephew of his who had the nickname Jicky.

It was originally intended for men but was popular with woman and became a very famous feminine perfume. It’s very androgynous. I don’t like the expression “unisex”. It’s horrible. It’s like “uniform”. There are no sexes in my perfumes.

Lisa: There is a lot of sex in your perfumes, to be honest. (Lots of laughter)

Vero: That goes too far! 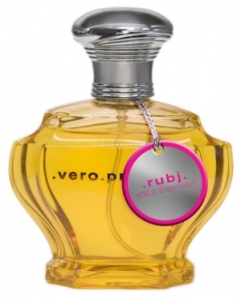 Vero: Now we are trying a raw material used in Rubj. What do you think it is? (A couple of people say neroli). It’s actually orange blossom absolute but neroli is made from orange blossom also. There is something oily about it, almost like gasoline. I made a kind of reproduction of orange blossom for Rubj with other materials to make it fresher. Orange blossom is not easy to work with alone. It’s too heavy.

The next raw material we are trying is tuberose which is also in Rubj. This is a synthetic which is more flowery than natural tuberose.

Now on the blotters you have the complete Rubj Voile d’Extrait which is a 14% dilution. 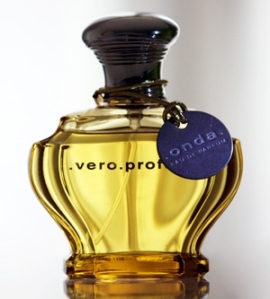 Vero: Onda means “The Wave” in Italian. It is dry, spicy, woody, there’s a little tobacco, a little honey.

We are now going to smell Onda Voile d’Extrait. It has a prominent note of vetiver. The natural material is Vetiver Bourbon.

I call Onda an oriental. It is a flying carpet to the spice market. It is also a chypre because it has oakmoss and patchouli. It is seen as difficult, just because we’re not used to this kind of scent. 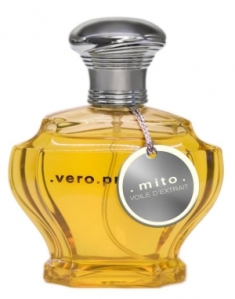 Vero: Mito came out 2 years ago. It’s a green perfume inspired by a visit to Villa d’Este near Rome. There is a beautiful renaissance garden there. I wanted to recreate the feelings I had in that garden. It was very mystical to me. There was a very specific scent in the air. The green, the water, the moss on stones, statues…

We now have a raw material from Mito to pass around. This is Indian magnolia known as champaca white. I have reproduced a base of this for Mito. It also has other green notes, galbanum, hyacinth and tuberose.

Now here is the Mito Voile d’Extrait for you to try. Mito means “myth”: The myth of eternal beauty and eternal time. 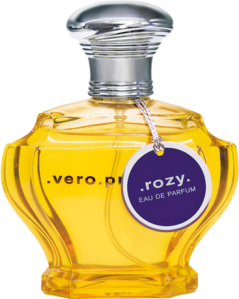 Vero: I wanted to create a rosy perfume, not a rose perfume. Being passed around is the main material. It is both a natural and synthetic rose made by myself. I also made the labdanum base which is very special. It is warm and balsamic with benzoin.

Now being passed around you have the Rozy Voile d’Extrait. It is very spectacular. Very dramatic.

There is melon, cassis, tuberose, rose and a base of labdanum, vanilla and sandalwood.

The EDP has a passion fruit base with peach. It has a heart of rose and honey, as well as geranium which gives it some freshness. It has a powdery base.

Rozy was inspired by Anna Magnani who was a great actress and a great woman. She starred in the 1950s black and white film “The Rose Tattoo” for which she won an Oscar.

The image for Rozy is a rose tattoo and there are similarities between tattoos and perfume. They are both about identification and recognition. Both go onto and under the skin. So I was influenced by Anna Magnani in this film. I think I made a good choice!

Bloom kindly gave us all samples of Rozy to take home. I am a big fan of Vero’s Voile d’Extraits and thought nothing could replace Mito Voile d’Extrait in my heart, but Rozy Voile d’Extrait has done just that. It’s that amazing smoked honey over rose that lingers through the night and into the next day. I am truly smitten.

After the workshop, Vero spent lots of time talking to people and answering questions. We had a lovely chat in which we bonded over getting into perfume through aromatherapy and the importance of tension in art, fashion, food etc as well as perfumery. Vero gave the example of adding a touch of cumin to orange blossom. This piques your interest and stops the perfume from being merely pretty but bland. We laughed about how surprising it was for Vero that so many of us recognised cumin. That’s multi-cultural London for you! 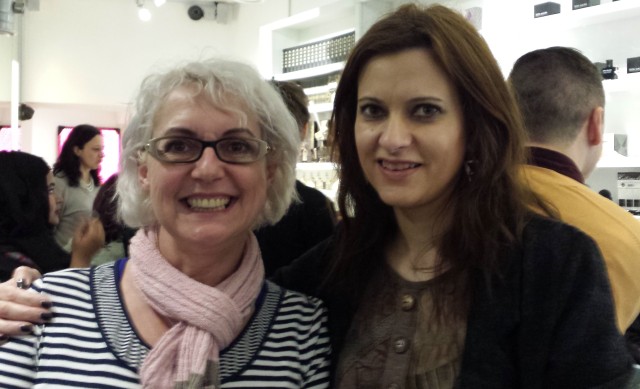 Tara and Sabine of Iridiscents

She told me she has been running workshops for private clients including banks and marketing executives. This focuses on the importance of olfaction when interacting with people. We also talked about the people in the blogosphere we both know including our mutual friend Val the Cookie Queen and of course, Olfactoria, about whom Vero exclaimed “I love Birgit!”

Many thanks to Vero, Lisa and everyone at Bloom for a wonderful evening.

Do you have a favourite perfume from Vero Profumo? Are you eager to try Rozy?

I'm on a journey through the world of fragrance - come with me!
View all posts by Olfactoria →
This entry was posted in By Tara, Rose, Vero Profumo and tagged Bloom Perfumery, Fragrance, London, Perfume, Rose, Vero Kern, Vero Profumo. Bookmark the permalink.