Neil Chapman is a British perfume obsessive living in Japan. His blog The Black Narcissus is a great read but be warned, you may turn green with envy at the regularity with which he picks up vintage gems at flea markets for a pittance. He is an extremely talented writer and his article “Perfume Haters” for Odou magazine recently won the coveted Jasmine Literary Award.

Neil, The Black Narcissus and Birgit aka Olfactoria

You may recall Neil’s wonderful series on vanilla perfumes for Olfactoria’s Travels last year. His vast knowledge and pure passion for vanilla are both endearing and contagious. He has a great way with words and his descriptions of the perfumes we tried during the evening were brilliantly unique, as you will soon see. It was also extra special because our own Olfactoria was in attendance.

As usual, the lovely Lila Das Gupta organised the event and passed around paper strips sprayed with each perfume. Here is an abbreviated version of a very fun evening:

Lila: So Neil, what first got you into vanilla?

Neil: My school organised a French exchange visit and while I was living with a French family, one evening the mother brought in a vanilla dessert flecked with pieces of vanilla bean. I was in ecstasy. Then at 17 I got into Obsession for Men which was more amber, cinnamon and vanilla rather than pure vanilla but I was obsessed with it. At university, a friend of mine wore Guerlain’s Shalimar and that made me realise that men could wear feminine fragrances. It’s been Shalimar and vanilla all the way since then.

I have a big sweet tooth. I like the sickly, full-on vanillas. Sick bag vanillas.

Neil: Some people think this doesn’t smell of anything. It reminds me of Japanese hot springs with negative ions in the air. It has a mineral, salty quality to it. At first it’s refreshing and sheer but as time goes on it gets richer and the vanilla grows and grows. It’s a 24 hour experience.

Neil: I call this one a “Play-Doh Cathedral”. The play-doh vanilla is undercut by vetiver and patchouli. I find it quite atmospheric, it has a ghostly quality.

Neil: I think the peach you’re picking up on is the fig note. It’s quite stylish. It has a wet clay aspect. I’m not sure I like it. It’s crepuscular and gothic. I imagine brides fleeing down corridors with billowing white veils surrounded by bats.

Lila: You went to stay at a vanilla plantation, didn’t you?

Neil: Yes, we actually wanted to go to Madagascar because they make the best vanilla however we heard they had an influx of locusts so we went to Java instead. We stayed at a family-run business and actually did a course in vanilla. Each vanilla plant has to be fertilised by hand and it was a slave called Edward Albous who discovered how to do this in 1841. The cultivation of vanilla spread around the world after that.

It was really something to see the amount of effort that goes into producing one bean. The vanilla plant only flowers for a few hours so the workers are regularly inspecting the fields. The process of gestation takes 9 months in all. There was a vanilla curing room in the house we were staying in and I almost passed out with excitement. It was extraordinary. I do have some vanilla pods from different regions to pass around.

(Tara: The pods were quite an eye-opener. Nothing like the sweet vanilla we are used to, they actually smelt more like raisins.)

Neil: I like all forms of vanilla. Even the synthetic vanillin.

Neil: This one is like the plastic wrapping being taken off furniture in IKEA. I call it “The Pod and The Plank”. The vanilla develops through a veil of smoke.

Lila: There’s something unfinished about it. It’s missing something, as lovely as it is.

Neil: If you look on the internet some people are fanatical about it. To me it’s like floor polish and wax.

Audience member: It’s like the inside of the new Globe Theatre in London which is made of all that wood.

Neil: Songes is frangipani, ylang-ylang and jasmine on a vanilla base. It’s heady, beautiful and creamy. Is it a vanilla perfume? It’s a white floral founded on vanilla. I think it’s divine, dreamy and lovely.

Neil: Vanille is known as a vanilla for non-vanilla lovers.

Audience Member: There’s a lot of galbanum. Another: And orange.

Neil: I think it’s very elegant. It has orange and petit grain on a burnished base. It’s smoky, woody and peppery with a strong rum note. It’s supposed to represent a ship carrying cargo like rum barrels and sandalwood to Madagascar or the Comoros Islands.

Vanilla is sweet, comforting and mildly addictive. It encourages adrenaline in the body.

Lila: It goes to the core of us.

Neil: It completes me.

Lila: What do the Japanese think of vanilla?

Neil: They hate it. While teaching at school on weekdays I have to stick to very light florals, so at the weekends I go mad. It’s very much frowned on to wear strong perfumes in Japan but on the weekend I’m like a perfume terrorist on the trains!

Neil: Orchidée Vanille is an orchestral vanilla. It’s a bit tame and pliant.

Neil: It has a bit of a rose and violet layer and a gourmand vanilla layer. It’s beautiful but it lacks a backbone. It’s a good pulling perfume.

Neil: Vanille Insensée is perfectly constructed. It’s very enigmatic and very popular. It’s a shadowy, subtle vanilla. It has a dark, woody edgy to it. It has personality. It’s too woody for me though. I’d never wear it.

Audience member: It’s too modern for me.

Lila: It’s better on skin. It’s uncomplicated and easy to reach for in the morning.

Neil: Spiritueuse Double Vanille is simply beautiful. It smells of hummingbirds. There’s cherry brandy and pipe tobacco. The beginning is stunning – it’s the best part – whereas most vanillas get better as they go on. It’s the smell of pure happiness.

Neil: Tihota is full on, creamy Madagascan vanilla. Lasts for a full 24 hours on the skin. If you hate sweet, buttery scents you won’t like it.

If you want a less sickly vanilla you could try Molinard’s Vanille. It’s vanilla vodka, cool and refreshing. Or Vanille 44 by Le Labo which I call a wooden meringue. It’s a stripped down, light vanilla. Another would be Vanille Galante Hermessence which is ylang-ylang and vanilla. It’s aquatic and quite beautiful.

Neil kindly gave us a hand-out listing various kinds of vanilla perfumes and I thought it might be interesting to share those that weren’t mentioned above:

So it was a fascinating evening of hummingbirds, billowing white veils with bats and a play-doh cathedral. Hopefully you can get an idea from the above of what a hugely entertaining and engaging host Neil was. I very much hope this won’t be the last time he visits us at PerfumeLoversLondon.

I really appreciated that he chose a wide range of vanillas showing varied treatments of the starring note, from sheer to super rich. Personally, I liked Spiriteuse Double Vanille and Orchidée Vanille, taking home a sample of the latter.

If, like me, you enjoyed hearing about his total immersion at the vanilla plantation, I urge you to read the wonderful detailed account on The Black Narciuss.

Many thanks to Neil, Lila and Grant from Basenotes.net for a fabulous evening.

Are any of these vanilla perfumes favourites of yours?

Editor’s Note: As I sit here on my desk, formatting Tara’s detailed account, I can still smell the amazing conglomerate of the many mouillettes I took away from this wonderful evening that are lying here beside me. My whole suitcase – and now my office – smells of vanilla and this memorable evening. I was lucky to be there and meet Neil in person. He is just as I imagined him – hyper-intelligent, passionate, a tiny bit weird and wacky in a wonderful way and absolutely lovely. I’m sure it was not the last time we crossed paths. I was also honoured to meet Neil’s parents and best friend Helen as well as Duncan, Neil’s partner of 21 years, who we often read about on his blog. 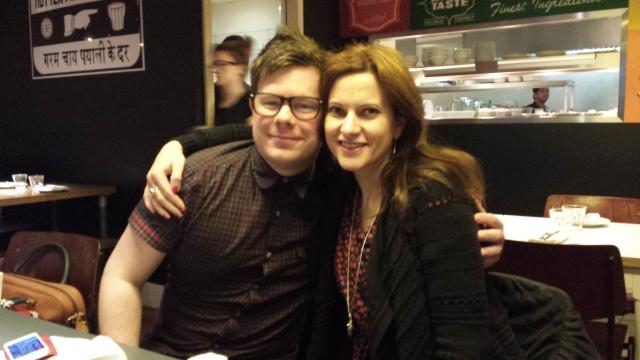 Seeing old friends like Tara, Vanessa of Bonkers, Thomas, The Candy Perfume Boy, Liam of Odou, Lady Jane Grey who many know from commenting, new acquaintances Sabine and Joshua and loyal readers like dear Olivia made this evening fantastic and one I will remember fondly.  I already miss London and wish I could come to every PLL meet up, but from now on I just have to smell a vanilla perfume and I’m right back…

I'm on a journey through the world of fragrance - come with me!
View all posts by Olfactoria →
This entry was posted in By Tara, Travels, Vanilla and tagged Fragrance, Perfume, Perfume Lovers London, The Black Narcissus, Travel, Vanilla, Vanilla Scents. Bookmark the permalink.