I was very curious to witness what perfumer Francis Kurkdjian was like in person, particularly because of how outspoken he has been in the past. He has little time for perfume criticism, professed to hate the way perfumistas “want everyone to like the same thing” and accused Jean-Claude Ellena of making perfumes that all smell the same (see interviews with Persolaise).

Lila Das Gupta led proceedings at this highly anticipated and sold-out event. As each perfume was discussed, paper strips sprayed with the fragrance were distributed. The following is an approximation of how the evening unfolded.

Lila: What was your first olfactory memory?

Francis Kurkdjian: Like most people, it was the smell of my mother’s scent.

Lila: When were you first aware of perfume?

Francis: Probably at the age of 14. I’ve never been drawn to perfume. I’ve never been interested in collecting. I never collected perfume samples. I like the story. Perfume is a name, a bottle, not just a scent. The whole thing. Shalimar is Shalimar. The Mona Lisa is The Mona Lisa. You can’t detach the story from the perfume. I got into perfume because I wanted to be a fashion designer, a couturier. But I had no skill for drawing. I saw perfume as a way to be close to where things were happening, to be close to the designer. It was a shock to learn that Yves Saint Laurent did not work on his perfumes.

At 24 I created Le Male. I was 25 when it was released. I didn’t see Jean Paul Gaultier for the whole 8 months of the process. I was away from everything. It was such a disappointment. It was the beginning of the end, or the end of the beginning, I’m not sure.

Lila: What was it like to be a young perfumer?

Francis: You have to have the right perfume for the right moment. I’m sure Jean Paul Gaultier would find Classique too classic now. Its time has passed.

Lila: Why start your own perfume house? It’s a difficult thing to do.

Francis: Because of Le Male, I found out that I would never work with Jean Paul Gaultier or anyone else. Maybe just half an hour to talk about the perfume. They don’t decide anything. I was sad about not being part of a team. You’re The Nose, you’re not The Brain. You’re not allowed to think. You can’t give your opinion on the tacky bottle or the cheesy ad campaign. I wanted to touch it, be part of it. I knew I wouldn’t be satisfied. Otherwise I would have gone insane.

I’m not driven by the small – of course I am, I create it – but I have code names for the perfumes I’m working on. For Le Male it was “New Beat”. At that time Jean Paul Gaultier was doing TV (Eurotrash) and he released a house music soundtrack. I like advertising, the name – the perfume comes at the end. So I didn’t start Maison Francis Kurkdjian because I wanted to, but because I felt I had to. I managed to get into perfume school. If not, I might have become a chef.

Francis: No, not because it’s sensory. I like to host people at home. That comes from my parents. I can be distant or aloof but cooking is about sharing. You share and you spend time with your family or friends. You do it with your hands. It’s what I miss with perfume. It’s not crafty. I love working on the box and the monogram. Intelligence with hands is the most important thing you can do. Like playing the piano or doing embroidery, being a couturier. In the lab working on perfume, the only thing I handle is a pencil.

Lila: You don’t mix the perfume?

Francis: I have an assistant for that. Otherwise it would get on your hands. 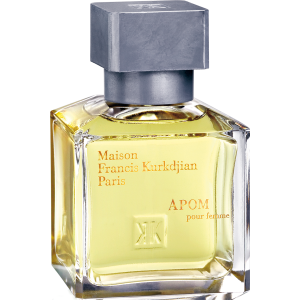 Lila: Tell us what you were trying to capture with this perfume?

Francis: (Thinking) What was I trying to capture?

Francis: My partner (Marc Chaya) is Lebanese. We are like Yves Saint Laurent and Pierre Bergé but we don’t sleep together. That’s how I describe it to people. He works on everything except the scent. We took a trip together to Lebanon. APOM is a tribute to Beirut. Perfume is a trace of you that you give to people. It isn’t a part of me, it is a part of the wearer.

I’m doing another version soon. The top is not right. It won’t be completely different though. I’m not like Dior who get rid of everything.

Lila: It’s like saying “you’re married to someone else now”.

Francis: It’s criminal. I’m against limited editions also. I don’t like it when only 200 flacons are released. When you release a perfume you try to create a dialogue with the wearer. So it’s criminal to say “That’s it!” I think it’s like having a love affair and then they disappear. You wouldn’t enjoy that unless maybe you were a masochist. Right now I am working on a product that will only be 50 pieces a year because of the material. Now with the availability of the internet, I believe you should be committed to your customer to supply it. The only problem is if the materials are restricted.

Lila: You do detergent, fabric softener, candles, bracelets. Did you map out that strategy?

Francis: No. What bloggers like, won’t sell. I’m joking…but not much! I go online and it makes me laugh. There’s no marketing strategy. I don’t map it out. I just do it because it’s what I feel. 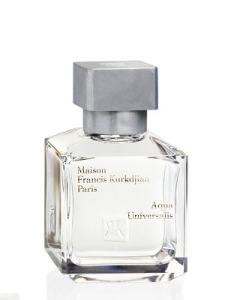 Lila: Tell us about this. It’s your best selling scent.

Francis: It’s the smell of a laundry product. So to make it I first needed an unscented laundry wash base. I had my worst meeting ever with Procter and Gamble in Belgium. I was convinced they’d love the idea and might even want to fund it! They just didn’t get it. They looked at me like “What the hell is he talking about?” So I had to find someone in Paris to produce it for me. I am very practical. I don’t map things out. I do a job I love. I am lucky. Most people don’t love their jobs. For me it is the luxury of my life. But a good idea is a practical idea. That’s modern life. You can’t have clothes that take two hours to put on.

Sillage de la Reine (In the Wake of the Queen)

Lila: Francis made this perfume in conjunction with Versailles and “A Scented Palace: The Secret History of Maire Antoinette’s Perfumer” by Elisabeth De Feydeau. I couldn’t put this book down!

Francis: This perfume started as a joke. You know the way people buy a perfume to get a free umbrella? So I thought, give perfume away with a book. I was interested in the original perfume formula and how the perfume was made. There’s no point in formulas being secret. It’s how you come to the formula that counts. The perfume based on the original formula is quite a mixture. It was bad and I was embarrassed, so I twisted the formula. I told Versailles, “It’s a recreation, not a renovation”. I think the 18th century was the most refined in terms of craft, music etc, so I didn’t want people to think they had bad taste. I made subtle changes, added more bergamot. It’s not very pleasant but it’s understandable.

Francis: I like this a lot. I have no taboo with body smells because I was a ballet dancer from the age of 4 to 24. It breaks down barriers because it is so intimate. I danced almost naked in front of 800 people in New York!

It was designed for night use. You come home, shower and put it on and it lasts for 2 or 3 hours. It’s very chic to wear a perfume inside. My father and grandfather were fur dealers. “Kurk” means fur in Persian. I remember being in the car on the way to church as a child and the smell of my mother’s fur coat with the perfume it held. Cologne Pour le Soir is a soft, fur, lipstick-y something.

Absolue Pour le Soir is when you go home and someone calls and says “let’s go out and party!” It’s leather pants, sweat, dirtiness. It’s the fantasy of a crazy night out. There’s a sweaty thing I love.

Lila: What does everyone here think of it?

There’s a general positive reaction from around the room.

Francis: It sells the least! This is why I love perfumistas. If they love it, it won’t sell.

Lila: It makes me think of Omar Sharif.

Francis: My mother loved Lawrence of Arabia types. It is a fantasy about crossing the desert on a camel. In reality, I’d last two hours. Running water is a good invention. It’s sandy, peppery, like being in a sandstorm.

Lila: What shall we try next? Elie Saab?

Francis: No really, I love everything I make!

Notes: Rose, aldehydes, spice and a honey chypre base.

Francis: Yes, it’s nice. The brief at Quest was “What should Guerlain smell like?” My mother wore Mitsouko. To me that is Guerlain. I don’t really like Shalimar. To me it’s Mitsouko. So I decided to do a new chypre. I used lots of rose oil and rose absolute. I didn’t expect them to like it because it was a creative work. We just had to get the price down. I like it. It is very classic, or rather, timeless.

Lila: Finally, I have a little treat for you. I managed to get some Papier d’Armenie.

Francis: The same company has been making these since 1885. It is their only product. It’s everywhere in France. People burn it to purify the air. I have Armenian grandparents, so for the “Year of Armenia in France” I did a limited edition with a new scent and a new cover design based on the Armenian alphabet. Like an illuminated manuscript. The “P” is in the shape of a parrot.

Audience member: Which perfumes by other designers do you wear?

At the end of the evening everyone was given 3 large spray samples from Maison Francis Kurkdjian (Amyris Femme, Amyris Homme and OUD) which was met with much applause, as you can imagine.

What do you make of Francis Kurkdjian? Are you a fan of any of his perfumes?

71 Responses to An Evening with Francis Kurkdjian at Perfume Lovers London, 20th June 2013