Hospitals And Holidays – Review: A Lab On Fire L’Anonyme And Sweet Dreams 2003

I’ll say it right up front:

While I was intrigued by A Lab On Fire’s latest offering What We Do In Paris Is Secret, I was a bit disappointed by the other two perfumes in the line.

I have a bit of a problem with a perfume that calls itself Anonymous. I want to express something with a perfume, some aspect of my personality, some character trait, a mood, a feeling, I want to relive memories or make new ones. I want my perfume to have a soul, a character, a distinct presence. Not be anonymous.

L’Anonyme smells just like its name suggests. Which is hardly something one should criticize, because at least it is truthful and fulfills its stated purpose.

L’Anonyme smells bland, innocuous and perfectly nice. L’Anonyme is what you should wear in an environment that is not perfume friendly. You won’t bother a soul with L’Anonyme, as a Perfumista you won’t be very happy though. Plenty of white musk, softly rosy and vaguely woody is how L’Anonyme presents itself, gender is not an issue of course. It has a low sillage, but lasts a good while.

It reminds me of – but I prefer it to – L’Eau by Serge Lutens but it makes do without the aquatic persistence that winds me up in that one.

When I think about it, there is one environment where I would love to smell L’Anonyme all around me as an ambient scent – the hospital. I think L’Anonyme could be great in waiting areas and emergency rooms, it would enhance operating theatres and bedrooms alike. It is the smell of white, clean and sterile, but in the best way possible, if you know what I mean. 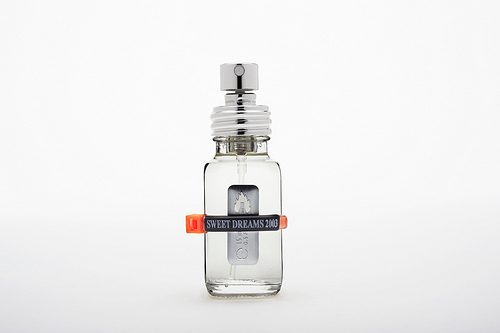 A cologne style orange blossom scent, Sweet Dreams 2003 is nice, but I have smelled it in about 435 variations before. It is light, airy and pretty, but I can’t for the life of me be impressed with it in terms of originality. It wears close to the skin and lasts for about four hours on me, the drydown is the prettiest stage, where a delicate amber sweetness bolsters the translucent orange blossom. A soft fresh green tinge is apparent throughout the development, which makes Sweet Dreams 2003 a very lovely summer scent.

One of many, though.

Did you try the line? What is your verdict?

29 Responses to Hospitals And Holidays – Review: A Lab On Fire L’Anonyme And Sweet Dreams 2003