What a wonderful man Bertrand Duchaufour is… If he doesn’t have a fan club already I’ll consider starting one. But before I start gushing let’s set the scene…

You will probably have heard of the new L’Artisan Parfumeur limited edition fragrance Séville à l’aube by master perfumer Bertrand Duchaufour, which came into being after a conversation with Denyse Beaulieu of perfume blog Grain de Musc. It was inspired by a story Denyse told Bertrand about a sensuous night she spent in Seville under a tree full of orange blossom during Holy Week. The development of the fragrance is chronicled in her book “The Perfume Lover“. Fragrantica lists the perfume’s notes as petit grain, olive blossom, orange blossom, incense, beeswax, tobacco, lavender, benzoin and olibanum. 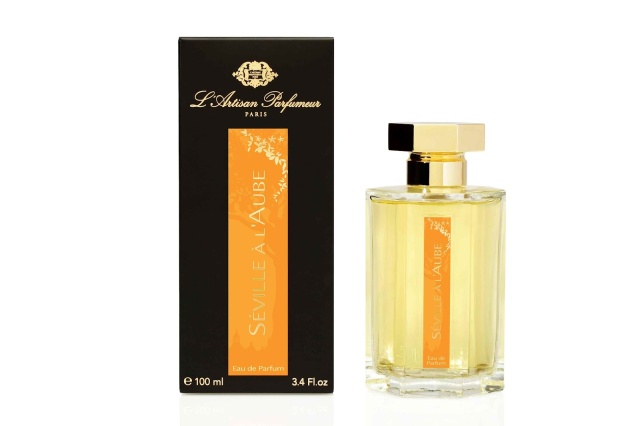 This week, to coincide with the launch of Séville à l’aube in the UK, Denyse and Bertrand came to L’Artisan Parfumeur’s store in Covent Garden for a series of “discovery sessions”. So I booked my place and showed up just before 6.30 on Tuesday evening. The event was held in the basement of the shop where Bertrand and Denyse sat on stools at one end, in front of an audience of around 15-20 of us.

Denyse started proceedings by explaining that her book sprung from the creation of Séville à l’aube, not the other way around. Her relationship with Bertrand began with conflict when they met on a radio show. This was because Bertrand was unaware that the subject of the show was the price of perfume. Her first impression of him was “grumpy and kvetchy”. However, a friend told him about Denyse’s beautiful review of Al Oudh and so when they met again three weeks later, he greeted her “with open arms” and invited her to his lab to learn more.

Denyse then gave a reading from “The Perfume Lover”, which was a much more literary version of the story she had first told Bertrand and that had inspired the perfume.

“I am in Seville standing under the a bitter orange tree in full bloom in the arms of Román, the black-clad Spanish boy who is not yet my lover… As altar boys swing their censers throat-stinging clouds of sizzling resins – humanity‘s millennia-old message to the gods – cut through the fatty honeyed smell of the penitents beeswax candles”. 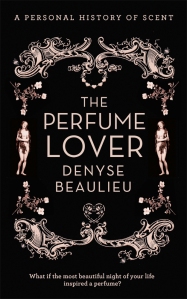 At first Bertrand thought that creating this perfume would be “an easy trick” because orange blossom and incense both have a mineral facet to them “they are both going in the same direction”. He then realised this was actually a difficulty because they are so similar. In Denyse’s words “they gobbled each other up”. Bertrand handed around blotters impregnated with the beautiful orange blossom absolute.

He elaborated that both incense and orange blossom absolute have a lot of base to them and that the perfume would be very dark and heavy. Something was needed to “shed light” on these rich notes. Bertrand stressed that contrast is very important in perfumery. Denyse had told Bertrand he had “duende” and read a excerpt from the book about it.

“Duende is the tragic awareness of death in life and when artists are possessed by it, their work resonates in ways that mere skill or artistry can never achieve. Bertrand’s got that, and he manages to express it”.

Bertrand commented that he didn’t know if he possessed Duende but that he focused on it for the creation of the perfume.

Denyse told us that the early version of Séville à l’aube was “Not very pretty”, at which point Bertrand interjected with “Quite awful!”. He had then asked Denyse if she knew what it was that she wanted. This made her feel “disconcerted and angry” because she was not a perfumer. However she thought about it and told him “there are no bodies under the tree”. She brought him her bottle of Habanita by Molinard to illustrate her point (“I brought the physical bottle because he is headstrong and stubborn!”).

This inspired Bertrand to reassemble the composition in a different way and to add the tobacco. However, the crucial new element he introduced was Spanish lavender absolute. Bertrand handed around blotters of this amazing material. Unlike classical distilled lavender, the absolute is deep and complex with a very noticeable facet of cistus labdanum. It is a perfume all in itself.

Bertrand explained that this material worked “vertically” to pull all the elements of the composition together. It fit with the green fougere effect in the top through to the orange blossom, beeswax and incense in the base. Denyse said she was “against the idea of lavender on principle” but took one sniff of the lavender absolute and exclaimed “Yes!”. She knew he had found the answer and it felt totally right. She told us “If that lavender were a man I‘d date it!”.

At this point they thought they had the finished product, however Denyse didn’t receive any compliments on it. So Bertrand “tweaked” the formula. He didn’t add or take away anything but just rebalanced it. He compared this effect to touching one part of a mobile and then watching the whole thing turn. This gave the perfume “amplitude” making it much more diffusive. To use Denyse’s words “It became the belle of the ball”. Bertrand described this as the alchemy of perfume.

He explained that diffusiveness is key to the success of a perfume. This is because good sillage is the best advertising a perfume can get and it is important for him that a perfume is a commercial success. As a result of the adjustment Denyse received lots of rapturous compliments from perfumers (one female even pinched her bottom) as well as random strangers in the street.

Denyse said they agreed that the book would not mention too much about what was in the composition in order to protect the formula. However, Bertrand did talk a little about how he reinforced the orange blossom with jasmine and added a touch of honeysuckle, to which Denyse exclaimed “Honeysuckle?!”. This was obviously news to her.

Bertrand said that he wanted the fragrance to be “sophisticated, easy to wear, easy for people to read (direct, simple) and at the same time be very rich”. Denyse added that he wanted to be faithful to the story but also faithful to his own style and level of quality. Denyse said that although she bore the original story she kept her “nose out of the formula”. Blotters were handed out with the final version of the perfume and Bertrand and Denyse mingled among the audience and we were free to ask questions.

On first trying Séville à l’aube I had felt a disconnect between the fresh, green, citrus-y perfume and the deep and dark scent I had imagined from her story. So I asked Denyse if the fragrance reminded her of that night in Seville. She said that it only brought to mind two things; the time they spent on its development, and the moment she said “Yes!”.

She had realised that “the perfume needed to be what it needed to be” and wasn’t going to be a literal representation of the aromas on that night. This made sense and gave me a new appreciation of the fragrance. She said that she hoped it would connect with people and bring them a story of their own, which is the sign of a good perfume. Denyse emphasised that the perfume was about her story, not herself. However, she later told us that if she didn’t have to try so many perfumes for her work she would wear Séville à l’aube “all the time”. A signature scent?!

Someone asked Bertrand generally about his source of inspiration and he replied that it can come from anywhere but it really “springs from the whole of nature”. I asked if any raw materials particularly inspired him and he said “Of course! Incense, calamus, davana…”. I also asked what it was about Denyse’s story in particular that inspired him and he said that he had wanted to create an orange blossom perfume. That it was a challenge for him.

I then took the opportunity to ask him about a fragrance that is close to Olfactoria’s heart, Frapin’s 1697. This perfume had mysteriously altered over time by a dramatic degree and not for the better. He told me that it was a problem with the rum absolute he had used. It was of a very high quality but it turned out to be unstable and he didn’t realise this until he came across it in a shop. I asked if he had found a solution to this problem and he answered that he was still working on it and it was important to him.

Someone else then asked him if he would ever start his own brand. He said you need a lot of money and a high profile to do so but in any case he enjoyed learning different things from his clients and cited Neela Vermeire as an example. Although he was reluctant to tell us, he also admitted that he can be working on 20 or so perfumes at any one time. In answer to the question “What perfumes do you wear yourself” he replied “I never wear fragrance. I used to wear Dior Homme but now not even that. When I‘m not working, I just want to let my nose breathe freely”.

The session was then wrapping up so I quickly paid for my bottle of Séville à l’aube and asked Bertrand to sign it for me. He wrote “For Tara, we shared a beautiful and scentful ******* Thank you! Bertrand”. The stars are there because I managed to wipe the word off when I got the bottle back in my hot little hands. Who cares though? It was an absolute pleasure to meet the man. I would never have expected someone in his position to be so approachable, open, honest, enthusiastic and happy to answer our questions. He is utterly charming in the very best way.

I pretty much floated home on a cloud of orange blossom.