Chambre Noire, the dark chamber of a photographer, is the darkest of the three Olfactive Studio perfumes, and maybe the most unusual.

“What happens in the darkroom? Mystery. In the darkroom, light is queen and darkness the heir apparent.  Light uses the closed space to cast shapes and contours. The darkroom is magical. In the darkroom, shadows are promises.  Isolated in this space, something from the realm of intimacy and secrecy occurs.

A lover’s ritual takes shape. Patience and attention are required for the enchantment to happen, for the dark to illuminate.
The darkroom re-wakens focus and contemplation and keeps speed and haste at bay. It is a temple for the eye to meditate; a temple, for it shelters as much as it reveals; captures as much as it delivers.”

– from the Olfactive Studio press map 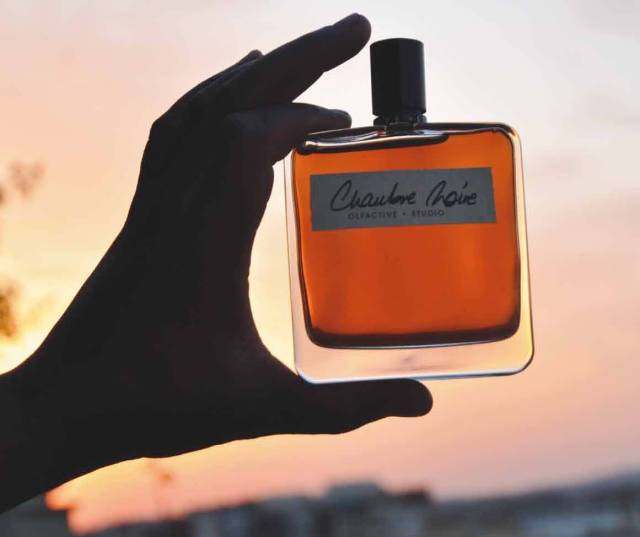 Chambre Noire has a very sharp top note, Schinus. Since I had never heard of it, I didn’t think I had smelled it before. It is a sharpish, spicy, strongly peppery and actually quite familiar note (which is what I wrote down initially), a quick Google search revealed the mysterious Schinus to be nothing else than pink pepper, so that mystery was rather quickly solved, and my nose was happy having been right.

This top note, strong and clear, is juxtaposed with the rest of the fragrance that lies in shadow. A dark, mysterious scent where dried plum and patchouli on a dark leather base are engulfed by smoky tendrils of incense.

A perfume that comes to mind immediately is Histoires de Parfums Marquis de Sade, the two are similar although the most marked difference, is the interesting counterpoint provided by the singing top note that illuminates the perfume like a ray of light. An hour into the development the pepper is mostly gone, so are the harsher elements of the scent and I am left with a wonderfully soft and comfortable warm leather scent that proves to be very long lasting, if close to the skin.

I like Chambre Noire, especially the drydown is totally my thing. The first hour is harder to get used to. I felt myself a bit irritated by the insistent pepper during the first few wearings, but I learned to appreciate it and by now I am almost addicted to its bracing stringency.

What I perceived as a bit alarming and screechy in the beginning, has morphed into something like my personal drill sergeant, who with a loud and rough voice and no outward friendliness whatsoever gets me to do what is best for me, having my best interests at heart. Believe me there are many moments when I crave such an engine that gets me going.

So don’t let that difficult top note fool you, after an hour of commands and orders, you are allowed to sink into that soft and smooth leather arm chair, put your feet up and take a little nap in front of the smoky wood fire.

This review concludes my Olfactive Studio week. What do you think? I am impressed with this launch, as those posts have shown, and I am glad that in these days of plenty (or rather: way to much) releases there are some in the crowd that really focus on art and on the product itself more than on clever marketing and empty promises. Also, you will have noticed, there is not a fruity floral in the lot. 😉

Please share your thoughts about the new brand, or what you think about the current state of things when it comes to new releases.

I'm on a journey through the world of fragrance - come with me!
View all posts by Olfactoria →
This entry was posted in Fragrance Reviews, Incense, Leather, Olfactive Studio, Woods and tagged Chambre Noire, Fragrance, Olfactive Studio, Perfume, Review. Bookmark the permalink.