The good people of Serge Lutens offered to send a sample of their newest release Jeux de Peau to the recipients of their newsletter. Of course I couldn’t be fast enough in sending off my answer of “Yes, please!”. The coveted sample took its sweet time and an extra round in the Austrian mail system until it arrived on my doorstep on the day of the international release. 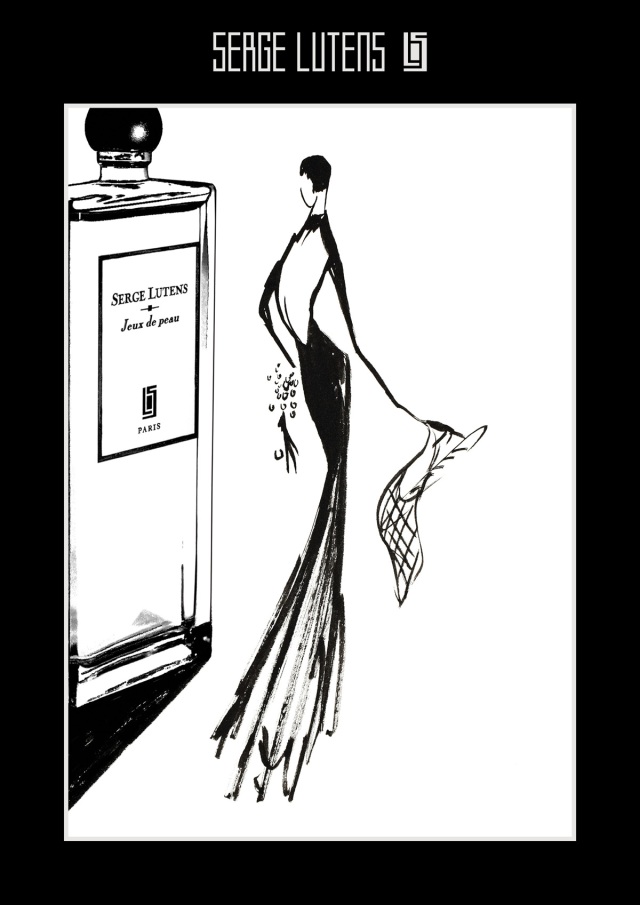 That way I had the chance to read many reviews before I smelled it, and they all fed my curiosity and incredulity, I had no idea what to expect, so many different descriptions, so many images evoked. But what everyone seemed to state unanimously was the presence of the scent of buttered pastry. Yum, I am all for eating pastry, but do I really feel the need to smell like a croissant?

I had to laugh out loud! The first whiff is indeed delicious! Fresh, warm, sweet baked goods, a caramel note that is a little burnt, the sweet air of a bakery store.

But, BIG but, for me this lovely bakery scenario last all of two minutes, if that, then Jeux de Peau starts to veer in other, no less interesting, but non-baked goods associated directions for me.  And a what good thing that is!

What is most prominent to my nose is a spicy celery note and then a blooming of fruity-apricot scented osmanthus. The woody backdrop of sandal wood lies there soft and warm, as a rich, yet never overpowering canvas upon which, a little dance of spicy, almost incense-y at times and slightly sweet puffs of air takes place. They hush in and out of my awareness.

Jeux de Peau is almost linear, but not steady. There is constant movement, like a river of scent that seems still, but is alive with thousand of tiny waves and movements, over stones and past outcroppings of the shore, over sandbanks and deeper pools, over smooth pebbles and jagged rocks.

The perfume has uncharacteristically low sillage (for a Lutens), it wears close to the skin, paying tribute to its name, but it lasts for a long time. With every wear I seem to note something different, a 1 ml sample does not last long, and I am lucky I got a second one from a perfume store, but even two samples are not enough. With this scent it will take several more wearings to sniff out all the nuances. The last time I wore it I got a distinctly salty, savory bread note in the drydown that I had previously missed.

Jeux de Peau is a gourmand scent in the very best sense of the genre. This is no bakery to me, this is the idea of a bakery, filtered and refined, rendered abstract, removed from reality, seen through the eyes of an artist and thus becoming something else, something higher – art.

Once more – while fully prepared to not like this, to be sceptical, to chart it all up to hype, to imagine M. Lutens sitting and having a good laugh about all of us scrambling and falling over ourselves to get our hands and noses on his newest offering (and no doubt he is smirking a little at least!), I am impressed. Impressed with the depth of this creation, with the artistic rendering of an idea, with the so much more refined execution of something that could have ended up mundane and literal in lesser hands.

Christopher Sheldrake and Serge Lutens are indeed a dream team, I imagine them communicating on a basis by now that is above speech. Sheldrake’s masterful execution of Lutens ideas, the minute direction of every technical step of the creation by Lutens – as I imagine it at least, I don’t know the first thing about their actual method of working – seems to me like a perfect pairing.

I have many perfumes in my collection, and many of them are by Serge Lutens. You could say I am a fan, but by no means an indiscriminate one. I have as many Scents of Horror that came out of the Palais Royal as I have beloved fragrances. (see Perfume Reviews for other Lutens perfumes)

But I have nothing that is similar to Jeux de Peau. It is undeniably Lutensian/Lutenesque, there is the signature of other creations in Jeux de Peau, it is clearly part of the oeuvre. It is like recognizing a Mozart composition even if you have never heard this particular concerto (although Mozart is probably not the best comparison, Bruckner or Mahler would be more fitting). But despite the recognizability as part of something bigger, Jeux de Peau is the most unique fragrance I have encountered in a long time.

The image of a river is certainly not what comes to mind for many people, but it is what this scent evoked in me and the longer I think about it the more it fits. It is a quiet, but powerful perfume, it looks innocent but it has the power to drown you, you need to be able to swim, then you will fully enjoy its pleasures.

After the initial delight with those yummy top notes that are no more than a gimmick, a little joke on the part of the master, Jeux de Peau took its time to reel me in, I was not enamored from the first wearing. But by the third time, I was smitten.

You may have read about my bottle embargo, so sadly the only chance I have to get a full size of Jeux de Peau is, when somebody gives it to me. (Maybe somebody who recently got a car?!) I would very much like to add it to my collection.

For times when I need reassurance, something to hold onto that is complex and deep, but soft and cozy at the same time, Jeux de Peau seems perfect.

If you are in doubt about this perfume (as I was before I really got to know it), it is worth your time. I am glad Lutens has created something so strange, yet likable, so unique, yet wearable.

Try Jeux de Peau! You know you want to! 🙂

I'm on a journey through the world of fragrance - come with me!
View all posts by Olfactoria →
This entry was posted in Fragrance Reviews, Gourmand, Oriental, Serge Lutens and tagged Christopher Sheldrake, Fragrance, Gourmand, Jeux de Peau, Perfume, Review, Serge Lutens. Bookmark the permalink.

32 Responses to A River Runs Through It – Review: Serge Lutens Jeux De Peau